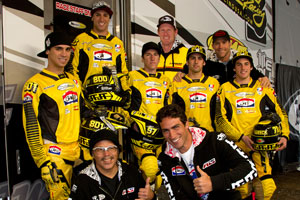 Then & Now: JT champions Chuck Sun (front left) Sebastien Tortelli (front right), Broc Glover (rear center) and Danny Laporte (rear right) pose with the 2012 JT Racing/MotoConcepts team.
Selecting a team and a top-five rider to wear the iconic JT Racing brand, and re-introduce the marquee to the Supercross ranks was not a task taken lightly by the crew at JT Racing. Sponsorship not only comes with the gear, but the heritage of the classic brand and the mentorship of ex JT champions - a list that reads like a who's who of the Hall of Fame. Many past JT champions such as Broc Glover, Sebastien Tortelli, Chuck Sun and Danny LaPorte were involved in the decision making process, and finally it was Mike Alessi and the MotoConcepts team who received the offer.

"David Dray (CEO of JT Racing) gave me a call and said, 'What do you think of Mike Alessi?'" Chuck Sun explained at the recent MotoConcepts team introduction at Milestone MX. "I've always been a fan, so I said, 'Well, he never quits.' They called every one of the JT champions and asked their opinion and here we are today signed with a top-five guy in the country that's going to carry the JT banner from the rich history where it was, into the future, bridging the gap between all the generations."

"It was a real honor for us to link up with JT," commented MotoConcepts team owner Mike Genova. "We think they're going to be a real point of focus this year, and we want to be a part of that. Their gear, their product line has some really unbelievable stuff. David Dray and his group really deserve a lot of credit for how creative they've been in re-establishing their name and transitioning it to the new [market]." 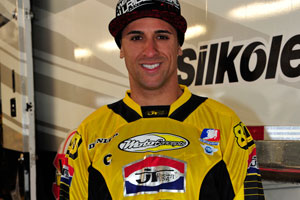 Denoted by the "C" on his jersey, Mike Alessi has been named the "Captain" of the JT Racing/MotoConcepts team.
The entire five-rider team will be wearing the iconic JT gear in the 2012 season. Joining the recognizable #800 on the MotoConcepts team are premier-class rider Jeff Alessi, Lites West contender Vince Friese, and Lites East riders Tommy Weeck and Jake Canada.

"I'm looking forward to the opportunity to work with JT and the opportunity to re-establish their company and make them a top marquee company again," said Mike Alessi. "I think it's awesome having guys like Chuck Sun, Sebastien Tortelli and David Bailey - just to name a few - that can help us. They can help me, my brother Jeff, Vince, Tommy and Jake and we can use their knowledge at the races like if we need help with a certain section. It's really great, not just for us but for JT, too."

At the JT Racing MotoConcepts team introduction at Milestone MX, riders were not able to take to the track due to excessive rain, but debuted the team's brand new yellow and black gear for media. Mike Alessi's jersey is adorned with a "C" denoting his role as "Captain" of the five-rider team.

"We've got a real surprise come A1," continued Sun. "We don't want to spoil it just yet, but they're going to be some of the best looking guys on the track. There's always going to be a new fresh look for the guys and they're always going to be proud to be sporting the colors." 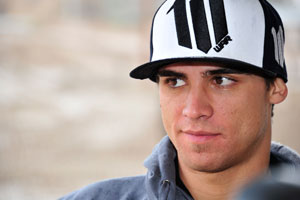 Jeff Alessi joins his dad and brother on the JT Racing/MCR team, and will be riding a 450 in 2012. 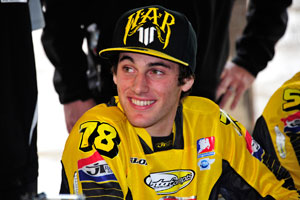 The affable Tommy Weeck will be contesting the Lites East Supercross series on his "MCR" ride. 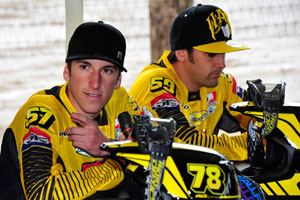 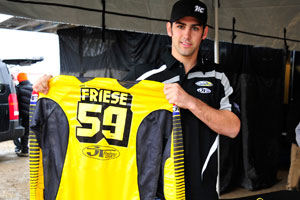 Last-minute team addition Vince Friese shows off his new JT jersey, which he will wear in the Lites West class. 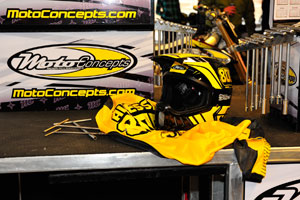 "It's awesome to bring JT back to Supercross," commented Mike Alessi. "I'm looking forward to a great season with them." 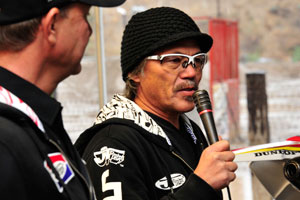 Team owner Mike Genova (left) interviews JT Racing's Chuck Sun (the only "Sun" that came out that day at Milestone).

Despite the rainy conditions, media came out in large numbers for the JT Racing/MotoConcepts team event. 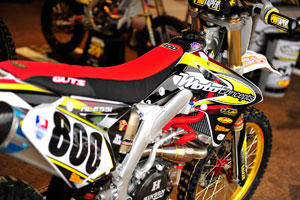 After a lot of testing and tuning, Mike Alessi's MCR 450 is ready for Anaheim 1. 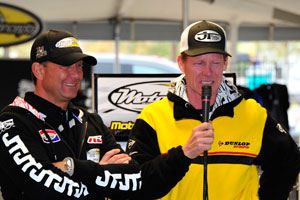 Dunlop's Broc Glover (right) is a proud sponsor of the MCR team, and a fellow JT Racing former champion as well.

ABOUT JT RACING USA - Launched by John and Rita Gregory in the late 1960's, JT Racing ruled the motocross world for decades. It was the gear of choice for racing legends like Smith, Sun, Vimond, Lechien and Bailey. For 2011, JT Racing returns to the sport it helped build with an innovative line of motocross gear: pants, gloves, jersey and a trick new helmet not only reminiscent of the ground-breaking ALS-2 of the early 1980's, but one that will make you rethink helmet technology entirely. With many past champions - Glover, LaPorte, Lechien and Hansen - developing, testing and promoting the new line of gear, JT Racing is poised to unleash the style and innovation that will once again become the gold standard in motocross. JT Racing USA - History. Innovation. And heart.