Ben Bostrom Back With Suzuki In 2012 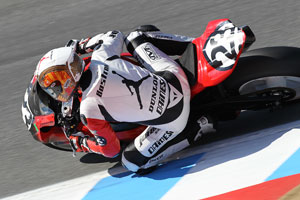 Michael Jordan Motorsports' Ben Bostrom will be returning to the team for a second season to compete in the 2012 AMA Pro Racing National Guard Superbike championship on the Jordan Suzuki GSX-R1000.

Bostrom - the eldest of the Bostrom brothers - race to fifth place in 2011 AMA Superbike Championship where he earned multiple podiums.

Said Bostrom: "I feel so fortunate to return to the Jordan Motorsports team. Last year the team put a huge effort into changing the bike so we can start 2012 at the front and race for a Championship. I have a great crew, a great bike; and it's always an honor to ride for Michael Jordan. I look forward to paying them back next year with a lot of wins."

"There's something special about Ben," said Kreig Robinson, MJM's Vice President of Corporate Relations. "He has world-class talent and is an incredibly-intense athlete. Along with Ben's laser-focused dedication and our team's support, we envisage a successful 2012."