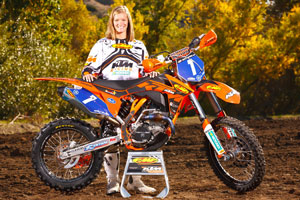 KTM Motorsports is pleased to announce the signing of Maria Forsberg to its Factory FMF/KTM Racing Team for the 2012 season. This announcement is the first time in KTM's U.S. racing history that a female rider will race under the factory semi for the season.

Forsberg was the most successful female off-road racing athlete in 2011 winning her second GNCC Championship title, the X-Games Women's EnduroCross Gold Medal and ending her year with top honors after being awarded as the AMA Racing Female Athlete of the Year.

"With Maria's success over her pro career and most recently this last season it was an easy decision to move her to our factory team. We are very excited to have her under the tent and to provide her with the support she has worked hard to earn. We look forward to working more directly with her this coming year to help her defend her title," remarked Factory FMF/KTM Team Manager Antti Kallonen.

Over her 9 year professional career, Forsberg has claimed 4 WORCS Women's Championships, 2 GNCC Titles, 2 AMA Racing Female Athlete of the Year awards and an X-Games Gold medal. She has raced her entire pro career as a member of the KTM support team RPM/KTM. 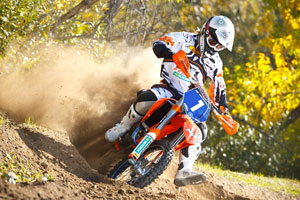 "I owe all of my success to my sponsors and my family. Mike Hurlbert and his RPM/KTM Team have helped me every step of the way during my career and I can't thank them enough for their support over the years," stated Forsberg. "Becoming a factory rider has always been my dream and I can't believe it has finally come true. I was so excited when I got the call. 2011 has been such a great year for me. With my racing success, my marriage and now joining the factory team, I couldn't have dreamed of a better year. I am very excited to race and represent the FMF/KTM Team and can't wait to get on the bike next season."