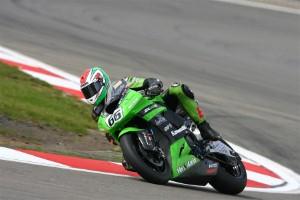 It was an up-and-down season for Tom Sykes and the Kawasaki factory team in World Superbike, but the manufacturer has shown that they have faith in the rider by signing him to a new two-year contract.

There was some speculation whether Sykes would be back with the team this year, after spending two years on the squad. However, a big key to the signing was Sykes' breakthrough at the Nurburgring back in September, when the rider captured Kawasaki's first-ever race win in World Superbike.

Kawasaki is hoping for more of that magic over the next two years, as Sykes will be paired again with his teammate from this year, Joan Lascorz. The team says that Sykes and Lascorz's feedback has been critical to the continued development of the Ninja ZX-10R sport bike.

"I'm very happy to be continuing with Kawasaki and the Ninja ZX-10R in 2012," said Sykes. "I believe the bike has good potential and we saw some of that come through in 2011 with a race win in Germany and superpole at Misano. These are the kind of results I am looking to achieve in the coming season on a regular basis and I really believe we can do this."