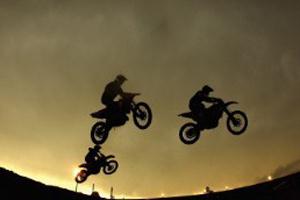 For the first time in the history of the sport, Speed will air 11 of the 17 AMA Supercross Championship races as they happen. Not only will there be live coverage of races, but CBS will also be broadcasting additional coverage, beginning with a Supercross Preview Show on Christmas day.

"The last few seasons of Monster Energy Supercross on Speed have provided great storylines and fantastic racing," Speed president Hunter Nickell told the news source. "Being able to deliver a record number of races live on Speed in 2012 is a testament to the growing interest in the series and the commitment to continue that growth by our partners at Feld Motor Sports and the team here at Speed."

There was a 24 percent improvement in Speed's ratings in 2011, when they aired eight live races, and the CBS network coverage saw a jump in ratings of about 21 percent.

Fans will be able to see their favorite riders climb about their bikes and take on the race tracks in Anaheim, Phoenix, San Diego, Atlanta, Arlington, Daytona, St. Louis, Indianapolis, Seattle, Toronto and Las Vegas.