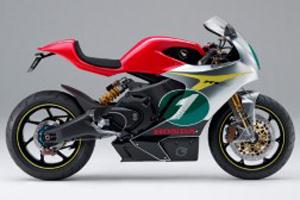 Honda RC-E Concept Electric Motorcycle
Honda looks like it will soon be entering the electric motorcycle market, as it plans to introduce a brand-new design at the upcoming Tokyo Motor Show.

The new bike, dubbed the RC-E, is still in the concept stage, but appears to be well on its way to production. The model combines a sport bike, racing-inspired design with an electric motor, for a track-ready electric bike that looks to quickly establish Honda as a major player in the emerging EV market.

In a press release, Honda describes the new model as "an EV version of a super sports bike that pursues the joy of riding. A powerful and smooth ride unique to an EV model is achieved with the 250cc-class compact body."

The addition of Honda to the electric game could turn the entire industry on its head. Up to this point, the major competitors have been electric-only companies, such as Zero. Honda jumping in feet-first with an electric superbike could prompt responses from other manufacturers. With full factory support and a large dealer network, the RC-E could quickly become the poster child for electric motorcycles.

Honda will also be debuting a new electric scooter concept, the three-wheeled E-Canopy, at the same show.