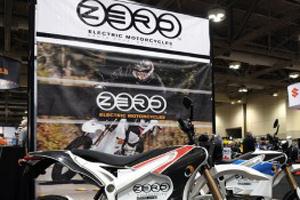 Zero Motorcycles recently unveiled their 2012 lineup of electric motorcycles at the EICMA motorcycle show in Milan. Now, the company has revealed that they may soon have their first customers - the London police department.

The police force in Europe's largest city will be trying out the new electric bikes on a trial basis, with the possibility of ordering more models for the department in the near future. The Scotts Valley Police Department in Santa Cruz, California, became the first police force to incorporate the electric models into their fleet, and since then more have begun using the bikes.

"The Motorcycle Team is very excited to be given the opportunity to test the Zero DS under everyday police conditions," said Mick Cheeseman, Sergeant in the Motorcycle Tasking Team. "Much of our work is about giving advice and instruction on keeping motorcyclists safe on London's roads, and being able to do this on an electric motorcycle means also we can aim to reduce our impact on the environment."

Many government agencies have been looking into electric vehicles as an option, as they are less expensive to maintain over time and allow the department to save on fuel costs.