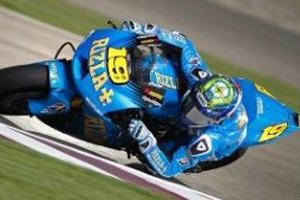 Team San Carlo Honda Gresini suffered a devastating loss this year with the unexpected death of rider Marco Simoncelli. Before his death, Simoncelli had inked a one-year contract extension with the team. Now, San Carlo has taken the first step in moving past Simoncelli's death by signing a rider to replace him for next year.

Alvaro Bautista, who recently parted ways with the Rizla Suzuki MotoGP team, just signed a one-year deal with the Gresini squad. Bautista was on hand for the team's first test in Valencia, Spain, and rode on Hiroshi Aoyama's bike rather than Simoncelli's. Aoyama will likely not be returning to MotoGP, but it is unknown if the Gresini camp will be signing a rider to replace him.

"I am particularly satisfied that Alvaro Bautista will ride a Honda RC213V in the colours of Team San Carlo Honda Gresini next year," team owner Gresini said in a team release. "He is a very fast rider and I also hold him in high regard for his personality and pleasant nature. I am sure that he will integrate swiftly into our group and that we will enjoy some pleasant experiences together in the future."