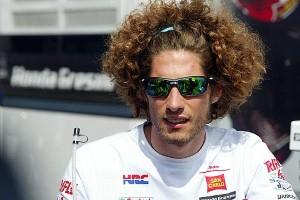 The shocking death of Marco Simoncelli has cast a long shadow over the upcoming final race of the MotoGP season at Valencia. Officials decided to go ahead with the race as a way to honor Simoncelli, but there was some speculation that the Honda San Carlo Gresini team, which Simoncelli raced for, would bow out of the proceedings.

However, the Gresini camp has now confirmed that this will not be the case, stating that they plan to race at Valencia as a way of showing respect for Simoncelli's memory.

"The decision to participate was not an easy one, but we have made this choice as it is what Marco would have wanted," Gresini said in a statement. "Going out on track at Valencia is definitely the best way to honor him by doing what he most loved to do: Ride and experience the world of MotoGP. This is why I believe that the best show of affection that we can make to Marco is by lining up our teams and riders for this race. 'Super Sic' will be present in the hearts of Hiroshi Aoyama, Michele Pirro and Yuki Takahashi, and I am sure that they will give him a most fitting tribute with their performances on Sunday."

Both the MotoGP and Moto2 teams will be fielding riders for the race, but nobody will be taking Simoncelli's spot.