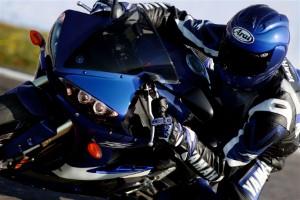 Those who follow MotoGP closely know that Michelin has lost to Bridgestone as the official motorcycle tire provider. However, despite the fact that the company isn't the main supplier for the premier competition anymore, that doesn't mean Michelin gave up on sport bike tires. In fact, the company's massive R&D department has continued to devote plenty of its resources to high-performance bikes, and the [mageProductLink sku="190-9136" title=""]Michelin Power One Race Tire[/mageProductLink] is the result.

The [mageProductLink sku="190-9130" title=""]Power One[/mageProductLink] is the new top-of-the-line racing tire from Michelin, and is made for high-end sport bikes like the Yamaha R1. Riders have a choice between three different types of tires that all bear the Power One name. The 17-inch version is DOT-approved, which means that riders don't have to worry about its legality on streets and highways. This is the tire for riders who have a sport bike, but don't necessarily spend all of their time at the track. 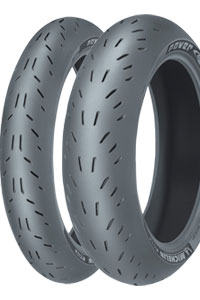 Still, this tire does the absolute bare minimum for DOT approval. The tread pattern covers just five percent of the surface of the tire with actual tread, which is the lowest amount legally possible. Essentially, this is a street-legal tire that tries its best not to compromise on performance, and only those experienced with sport bikes should consider it. If you're primarily going to be riding away from the track, you'll probably want to go in a different direction.

There's also a 16.5-inch tire that is not DOT-approved, and thus can only be used on track day. This is the motorcycle tire for the serious racer who is building a bike for competition. There are also Power One rain tires for when conditions get a bit slippery.

The front tires come in several variations - either "A," "B" or "V," and all of them alter how the bike performs. The A tire is a five-ply construction with a soft compound, while the B tire is essentially the same thing with a slightly stronger medium compound. The V tire is the most radically different, using a four-ply construction that gives the tire a pointy, almost triangular shape that is said to improve responsiveness on cornering. This type has especially has become very popular with many sport bike racers.

You'll be able to tell which version you have by looking on the tire itself - it should be marked with one of the letters. If not, you're probably using the rain or DOT-legal version of the Power One.

Similarly, the rear tires also have several options available - "A," "B," "C" or "D." The A, B and C tires are all made of four-ply construction, with increased compound strength for each one - A is the softest, while C is the hardest. The D is a specially-designed tire for use on tracks with high-speed banked corners, like Daytona. The tire's three-ply construction allows for much better handling on these corners.

With Michelin out of MotoGP, some might assume that these are second-tier tires. In short, they're not. The Michelin Power One Race Tires are some of the most critically-acclaimed sport bike tires on the market. Major racing publications have praised the tires' incredible grip and superior handling on just about every track. The company may not be as visible as they once were when they were supplying tires to the likes of Valentino Rossi. However, the Power One is a clear indication that Michelin is not exiting the sport bike tire arena anytime soon - and most racers who try these tires will agree that that's a good thing.