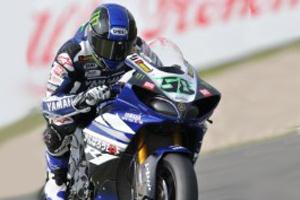 Earlier this year, Yamaha announced that it would no longer be competing in World Superbike, disbanding its team and forcing riders Marco Melandri and Eugene Laverty to look for work elsewhere. The duo gave the team a fitting send-off this past weekend by taking first and second place at the World Superbike finale in Portugal.

Laverty led for most of the race, but it was ultimately Melandri who would get the overall win. Melandri passed Laverty on the 18th lap in a 22-lap race, and was able to hold him off to take the victory by a little more than a second.

Melandri, who is in his first year in World Superbike, got his fourth win of the season. The rider impressed many fans with a strong performance in his rookie season, ultimately coming in second place overall in the standings. Melandri is planning to race for BMW next year. Meanwhile, Laverty has announced that he will be joining the Aprilia team for 2012.

Jonathan Rea of Honda came in third, following closely behind Laverty. Fourth was Carlos Checa, who already clinched the competition's championship earlier in the season.