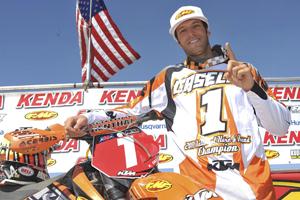 It was rather uneventful in the end, but Kurt Caselli has clinched the championship in the AMA Racing/Kenda National Hare & Hound Championship Series with some nice riding at the eighth round in Lucerne Valley, California.

Caselli has been the dominant racer all year long, although he wasn't the best rider on this particular day. That honor went to Kendall Norman, who led wire-to-wire and was never seriously challenged by anybody. After grabbing the holeshot, Norman built up a big lead and proved that he will be a serious contender this year. He might have been closer to Caselli in the overall standings had he not suffered a knee injury earlier in the year that forced him to miss several races.

Caselli, meanwhile, took things easy and rode his way to a second-place finish, which was good enough to clinch the championship.

"I just rode really consistent and smooth, and just rode my own race," Caselli told Cycle News afterwards. "I'm happy to get the championship - not just for myself but for KTM as well."

There's still one more race left in the series, with the riders heading back to Lucerne Valley on October 23rd to finish out the year.