Hayes Gets To Ride In Valencia 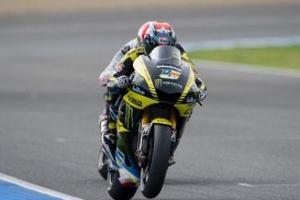 Josh Hayes will get to fulfill one of his longtime dreams by riding aboard an official MotoGP bike, thanks to a kind gesture by Yamaha.

Hayes brought the Japanese manufacturer a second AMA Superbike title this year after some strong racing. However, he was disappointed earlier in the year when the team denied him the chance to race in World Supersport. At the time Yamaha race boss Keith McCarty felt it would be too risky to lose Hayes to injury while he was on his way to a championship.

Hayes was disappointed, but acted professionally, according to McCarty. Thus, the team decided to repay Hayes for his cooperation by pulling some strings. Hayes will ride the Monster Yamaha Tech 3 YZR-M1 at the annual test after the final round in Valencia, Spain. Hayes will be subbing in for Colin Edwards on the bike during the final test of the year.

"It's the perfect way to go about experiencing a GP bike," Hayes told Cycle News. "As a professional motorcycle racer, one of the things I was a little bummed about was that I might not ever get to ride the top technology that there is in motorcycle racing, to experience that."

As for whether Hayes could get into an official MotoGP race, never say never. Earlier this year, when it looked like some riders may not attend the Motegi race in Japan due to fears of radiation, Hayes was one of the possibilities for substitution into the race.