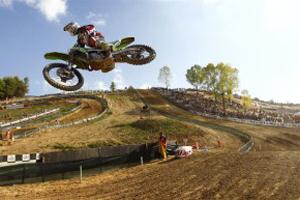 In what may be a shock to some, team manager Mike Fisher is leaving Monster Energy Kawasaki.

Fisher has been credited as one of the key reasons that the team has had so much success over the past year. It's not often that a racing team gets to lift two championship trophies in one year, but Fisher and racer Ryan Villopoto did exactly that, winning the 2011 AMA Supercross competition, and most recently the AMA Motocross championship as well.

Most fans would assume that the team would do everything possible to hold onto a talent like that. However, in an open letter, Fisher has confirmed that he is leaving the team. At this time, it's unclear if he is departing for personal reasons or if the team has effectively fired him.

"I'd like to respond to yesterday's rumors, and confirm that my 18-year relationship with Kawasaki Motors Corp., U.S.A., did indeed reach its end Monday morning," Fisher wrote. "Although it may seem a surprise to some, for myself and those that have worked closely with me throughout the year, this unfortunate news was anticipated and expected. This past year has been the most challenging of my career, as well as the most rewarding."

Kawasaki has not commented on the statement, leaving fans scratching their heads as to what exactly is going on.