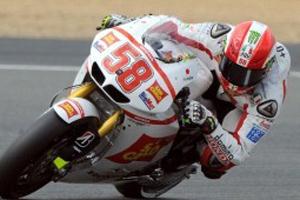 Marco Simoncelli has re-signed for Team San Carlo Honda Gresini for the 2012 season, ensuring that the rider will remain with his current team for at least one more year.

Simoncelli has been one of the more promising young racers in the MotoGP class, putting in a strong showing in just his second year. There was some speculation that he could end up jumping to one of the factory teams once the season was over, but the news confirms he will be with Team San Carlo for at least one year. The rider will also be receiving factory support from Honda while on the team.

"To be wearing the colors of Team San Carlo Honda Gresini for another year and riding a Honda RC213V gives me a lot of satisfaction," Simoncelli said in a team release. "To be kept on as part of project that Honda HRC are so supportive of in collaboration with Team San Carlo Honda Gresini gives me a lot of confidence and all the motivation I need to show that I can be amongst the best in MotoGP again."

Simoncelli is currently eighth overall in the MotoGP standings with four races left on the schedule.