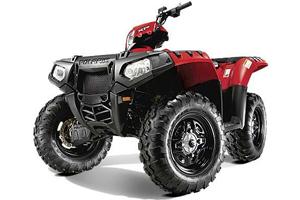 Polaris has unveiled its 2012 product lineup, which consists of a number of new ATVs, side-by-sides and motorcycles under the Victory brand.

Perhaps the crown jewel of the new lineup is the Ranger RZR 570, which the company describes as a "trail-ready" side-by-side. The model features a brand-new ProStar 570 engine, which was specifically made for side-by-side models. The 570 joins a full lineup of previously released Ranger RZRs, including the XP 900, 800, S 800, and 4 800.

The company doesn't only offer side-by-sides for recreation. The Ranger Crew lineup is comprised of models designed to handle the heavy load that workers need. The new Ranger Crew Diesel is a diesel-powered version of the previous Ranger Crew 800. The company is also releasing the Ranger HD 800, which has a new braking system for tough hills not found on the other Ranger models.

The big change in the ATV segment comes in the form of a new engine, known as the 850 Twin. Polaris claims a 20 percent increase in performance with the 850 Twin over previous offerings. The new part will be found on the Sportsman XP 850 H.O. and Sportsman Touring 850 H.O. as well.

As for bikes, Polaris is touting its new Victory Cross Country Tour, which the company calls "the new standard in performance and comfort" for the touring segment. The company is highlighting features, such as adjustable airflow and a heightened windscreen, to provide additional control for touring riders. The model also features a V-Twin engine along with standard anti-lock brakes on all their touring models.