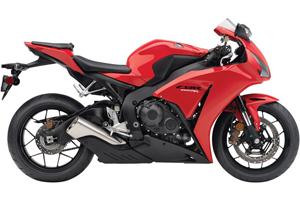 The new version of the Fireblade features a number of improvements over its predecessor. The biggest change is likely the new front and rear suspensions, with Honda claiming that this is the first implementation of their advanced rear suspension on a production bike. It also features updated styling, a new instrument panel and 12-spoke wheels.

The model was unveiled by racing legend John McGuinness at Le Mans and by Honda rider Jonathan Rea at the World Superbike event.

"I've got a real soft spot for the Fireblade," said McGuinness. "I've ridden it in many different racing events over the years and had a lot of success with it. In fact, some of the most memorable moments of my career have been on the Fireblade - from TT wins to this year in the World Endurance Championship. Unveiling the new model here at Le Mans is pretty exciting and I'm honored that I was chosen to do it. It's great that all the thousands of racing and Fireblade fans around the world will now have the chance to see it for real.