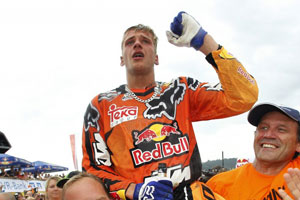 Roczen, who competed in the AMA West Supercross Lites Championship last season, will return to the U.S. full-time this year to compete in both series aboard his 250 SX-F. The German rider was most recently crowned as the 2011 MX2 World Champion. He is the youngest rider in the series history to win the title.

The 17 year-olds fan base grew significantly last year after fans witnessed his energetic, youthful personality and unique riding style during the Supercross season. He proved he was a top contender in the Lites Supercross class with a podium at both the Anaheim 2 and Salt Lake City rounds as well as a race win at the season finale in Las Vegas. Furthermore, he proved he could easily transition between classes when he switched to the 350 SX-F and competed in two of the Supercross class rounds.

"I am so excited to return to the states to race. I really learned a lot last year during the Supercross season and began to turn my season around at the final races. I am hoping to pick up where I left off, and with any luck, stand on the podium a lot next season," remarked Roczen. "I am also equally excited about the outdoor series as I have never raced motocross in the United States and I am looking forward to the new competition and new tracks." 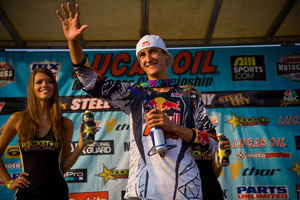 Joining Roczen on the Red Bull/KTM Factory Team is 2-time MX2 World Champion, Marvin Musquin. The French rider relocated to California last year to compete in the Supercross and Motocross Championships but was plagued with injury early on. A torn ACL left him out of the Supercross competition, a series he is most looking forward to for 2012.

"Supercross racing has always been my favorite form of racing. I am so excited to race in the stadiums in front of the crowds. I love the big jumps and fast pace of Supercross racing and can't wait for the first round," stated Musquin.

Musquin will also compete in the 250cc Motocross season for his second year in the U.S. He was again plagued with injury at the beginning of the 2011 motocross season but made up for his absence in the final two rounds of the series where he landed on the podium twice. Musquin is currently preparing for the 2011 Monster Energy Cup race in Las Vegas, NV where he will compete in the premier class aboard a 350 SX-F.

"We are excited to have two well-decorated and talented riders on our roster for the 2012 season," said Red Bull/KTM Team Manager Roger DeCoster. "As past champions, both riders have proved they have the discipline and skill to win races and be title contenders. The entire team is excited for next season and we are looking forward to a very successful year."