Buttrick Out For Somerset GNCC 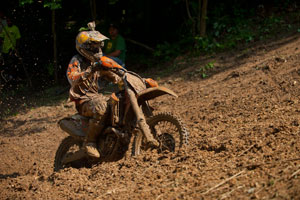 FMF/KTM rider Cory Buttrick confirmed that he will not race the Somerset GNCC this weekend as he is still suffering from the side effects of the concussion he sustained in his collision with Josh Strang at the Unadilla GNCC.

Buttrick was involved in a crash with pro rider Josh Strang on the opening lap of the Unadilla GNCC. Buttrick was immediately taken to the hospital following the crash where they determined he had suffered a severe concussion. Buttrick has been resting at home the past week trying to recover from the accident but has still been feeling dizzy and has a reported having a hard time concentrating. He will take this weekend off and hopes to return to the bike next week in order to prepare for the final National Enduro round on October 1st.