Yamaha has taken the wraps off its 2012 WR450F and WR250F bikes, and one has undergone some major changes for the new model year while the other has stayed virtually the same.

The chassis and overall design of the WR450F has taken on many characteristics of the YZ250F, according to the company. The KYB SSS air/oil separate 48mm cartridge-type fork and KYB shock from the YZ250F are both present on the new bike, as is a bilateral beam frame, reports Cycle News. Overall, the bike has a slimmer frame more reminiscent of the YZ model.

Perhaps the most major change to the bike is the new fuel-injection system, which is expected to help off-roaders tremendously. Adventurers know that hilly terrain is quite common, but previous versions of the bike had to be adjusted depending on if you were going up or downhill. That's now a thing of the past with the new fuel injection. 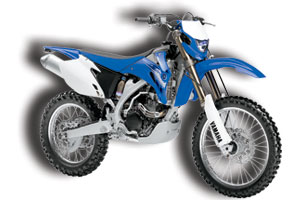 The WR250F shares many components with its bigger brother, but doesn't have any truly new features.

Both models earn green stickers under California's emissions standards. The WR450F retails for $8,090, a more than $400 price increase over its predecessor. The WR250F carries an MSRP of $6,890.