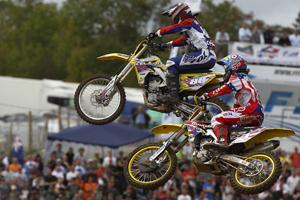 Team USA was able to win its seventh straight Motocross des Nations on Sunday, with the trio of Ryan Villopoto, Ryan Dungey and Blake Baggett pulling out the win in the final race of the day.

Each nation selects a rider to compete in a certain division. Villopoto handled the Open class, Dungey was designated as MX1 and Baggett was competing for MX2. Each race features two divisions, with three races being run throughout the competition, meaning every rider gets on the track twice.

Blake Baggett struggled in both of his races, placing somewhere near the back of the pack each time. Fortunately, Dungey and Villopoto picked up the slack, with each taking third place in the first two races. However, Team USA was far from assured of taking home the gold going into the final race, as France, Great Britain and Australia had also raced well up to that point.

That's when Villopoto and Dungey - normally rivals on the motocross track - turned on the jets and guided the team to a 1-2 finish, securing the win for the team. France placed second, while Great Britain came in third place. 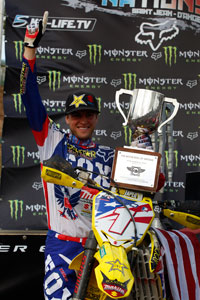 Rockstar Makita Suzuki's Ryan Dungey was again part of a victorious Team USA that claimed the prestigious Chamberlain Trophy at the Motocross of Nations for the seventh year in a row yesterday.

The 2011 AMA Supercross and Motocross runner-up and former double Champion helped his country to the top step of the podium in a close finish to the 65th edition, run under showery skies and in front of a noisy, passionate and cosmopolitan 68,000 crowd at St Jean D'Angely in France.

Dungey scored second and third in his two motos to win the MX1 class and assist enormously with the points score for the defending Champions. It represented his third appearance in the Stars and Stripes colours and now involves a perfect 100% record. The rutty hard-pack was even more difficult when intermittent heavy showers made the dirt rough and slippery. Conquering the conditions for a landmark achievement was Dungey's team-mate Brett Metcalfe whose seventh and 10th positions in the MX Open category hoisted Australia onto the podium for the first time ever in the history of the competition.

RM-Z Suzuki machinery was prevalent throughout the field in the three classes. Taking the factory RM-Z450 Rockstar Energy Suzuki World MX1 motorcycle to fifth in MX Open - just ahead of Metcalfe - was Kevin Strijbos. The former double World Championship runner-up began the last moto of the day with a chance to elevate Belgium into yet another podium slot but a bad start meant he could only secure 11th to compliment his fifth place captured earlier on. Belgium was still fifth by the end of the day with several of their top riders, including Clement Desalle and Steve Ramon, injured on the sidelines. 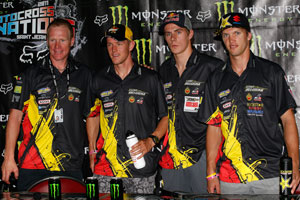 Marcus Schiffer was 11th overall in MX Open and was pleased with a confident run to 13th in his first race although he struggled slightly with his physical condition in the second. Team Germany was without luck - even if Ken Roczen did very well to win MX2 - and filled seventh place.

Yoshi Atsuta, always a popular addition to the international paddock and fondly remembered for his grand prix days in Europe, rode well in tricky conditions to walk away from the French event with eighth in MX1. The Japanese ploughed across the bumps for 13th and 17th positions that were the best results for Japan as they occupied 13th in the final ranking.

Ryan Dungey:
"I think each and every win is amazing and it was cool to pull it off. There was a little bit of rain and the track was tough but I'm really excited to get this one. The first race was tough. I felt good at the beginning and was closing in on the lead but when the rain came down it was really slippery. Chad Reed was riding well and got away. I made a mistake but kept it up. When it starts getting muddy and slippery then the bike gets heavy and it was tough-going." 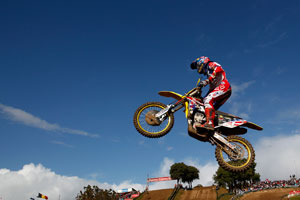 Brett Metcalfe:
"We came here Friday for the press conference and it almost felt like we were the laughing stock, like 'here comes Team Australia again, a great team but they'll probably take seventh again like every year'. To finally get that out of the way and get on the podium is awesome for Australian motocross."

Kevin Strijbos:
"The first race was pretty good. I had a good start and was riding well. Sometimes I felt I was a little bit faster in places but passing was so hard but overall it was OK. For the second moto I went to the inside but it just didn't happen. I blew it there. I was 15th or 16th and it was difficult to overtake the others. The crowd was going insane and it was fun to race here. I think we cannot be disappointed with fifth; it is pretty much what we expected even if we did have a chance of the podium before the final race - if I made a good start! The bike really suits me and I've enjoyed these last few meetings. I want to thank the team for all their help and I hope I can find something good for next year soon. I know I can make top five in the World with the Suzuki."

Marcus Schiffer:
"My first heat was really good. I had a good start and managed 13th. In the beginning I pushed a little bit too hard because the Americans came through and I wanted to go with them. I had a bit of arm-pump but the result was OK. I'm not happy with the second heat because I stopped the bike going up one hill and was completely last. I couldn't find the rhythm and for the first time this season I had muscle cramps that were so painful; it was difficult to ride! Overall I'm happy because it was tough for our team with the bad luck with Max being injured and Danny crashing out of the last race." 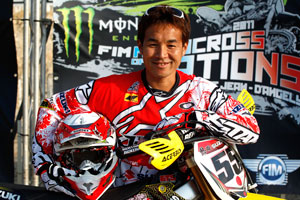 Yoshi Atsuta:
"It was OK today and I really enjoyed it. I had quite good starts in both motos but those guys are very quick! I struggled a little bit because there were so many ruts and it was a high-speed track. My riding is getting better but I need a bit more time. Now we go back to four more races in Japan and my goal is to get the Championship again. I am behind Akira Narita by 19 points and I will push hard to try and pass him."