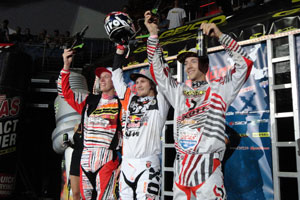 Red Bull/KTM rider Taddy Blazusiak dominated once again adding to his perfect season at the fourth round of the GEICO AMA EnduroCross Series held at Citizens Bank Arena in Ontario, CA.

Blazusiak, who started off the season with a dominating win at the X-Games, has now won every round of the series and didn't disappoint the crowd in Ontario after pulling to another great lead and taking his fourth victory.

In the main event, it was Blazusiak who held on the gas the longest and launched his KTM into the lead at the first corner. Brown was sitting in second position as they turned the first corner into the fire pit where he stumbled and allowed a few riders to pass. Brown dropped to fourth as the riders began lap two but struggled again when he got stuck in the big boulders and lost valuable time.

Meanwhile, out front, Blazusiak had made a bobble and allowed the second place ride of Haaker to close in. Haaker tailed Blazusiak for about a lap and a half before Blazusiak got a second wind and began to put on his typical charge. Blazusiak went on to take a dominating win while Haaker earned his best finish of the season with a second place result. Cody Webb rounded out the podium. Brown went on to finish 8th for the evening.

"I am really excited to get another win tonight," commented Blazusiak. "It was not easy. I got held up in the matrix a couple times tonight which allowed Haaker to catch me for about a lap and a half. Luckily, I was able to regroup and charge out front. Once I knew I had about a 10 second lead at the end of the race, I was able to relax and cruise to the finish. I'm really happy with this season so far and am really looking forward to the next event."