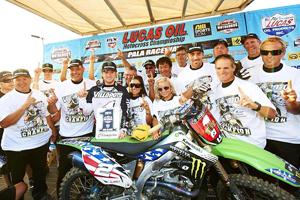 Ryan Villopoto wrapped up the AMA Motocross season this past weekend to win the 450cc class, his first ever outdoor championship.

It's been a great year for the Kawasaki rider, who also took home the Supercross championship. Going into the final race of the season, the only rider who really had a shot at Villopoto was Ryan Dungey, who was down by 14 points. Villopoto all but won the championship in the first moto when he took home first place to add three more points over the second-place Dungey.

In the second moto, Villopoto essentially had to just remain upright to win the title. He finished in third place, behind Dungey in first and Justin Barcia in second.

"I didn't want to just go out there and ride today," Villopoto told Cycle News. "I felt good in the first moto, and I went into the second just looking to stay out of trouble. We started off outdoors not very good, but we finally came around. It's been a tough year. If it weren't for [Dungey's] DNF at Texas, I would have come up a little shy [of the title]. But, things like that happen."