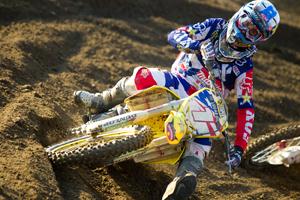 Ryan Dungey was disappointed Sunday after finishing second place to Ryan Villopoto in the AMA Motocross championship, but it appears that next year will see a change for the rider, who is still searching for another championship to add to his collection. A team press release has confirmed that Dungey will no longer be riding for Suzuki as of next season.

Dungey will be in search of a new team for 2012, although his relationship with Suzuki is not completely over. The racer will be competing in the upcoming Motocross des Nations, and he will be onboard a Suzuki with the full support of the factory as the Americans look to overtake the other competing nations. After that, however, he's a free agent.

"Ryan Dungey has had great success in his years with the team, as Suzuki's Championship DNA propelled him to score both 250 and 450 titles aboard the RM-Z," said team manager Mike Webb in the release. "We wish Ryan much luck with his future endeavors."

Dungey has yet to indicate which team he will go to, but many believe that KTM is a safe bet, as Dungey has a good relationship with team manager Roger DeCoster.

Suzuki, meanwhile, will be moving forward with racer Brett Metcalfe, who finished fourth in AMA Motocross despite going down with an injury this year.