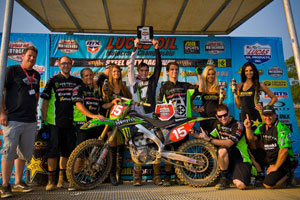 Monster Energy Kawasaki rider Dean Wilson was able to clinch the AMA Pro Motocross 250cc championship this past weekend, putting in an impressive 1-1 performance to seal his victory.

Wilson dominated in both races of the weekend, winning wire-to-wire in the first and holding off a challenge from Eli Tomac in the second. Tomac had a good weekend as well, with two second-place finishes.

Wilson was ecstatic about winning the championship, although a bit disappointed that he hadn't arranged for his family to come, assuming he wouldn't win until next weekend. 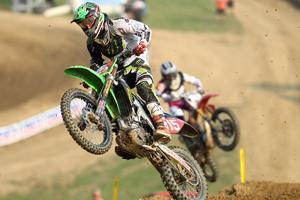 "This is the greatest day to me," said Wilson. "I went to sleep when I was young dreaming about winning an outdoor championship. Now, it's a dream come true... I went by the pits and saw on my pit board that I was the 2011 MX Champion, and it gave me goose bumps. I just went out there and rode the way I know how to. I actually didn't want to win it this weekend, because my parents aren't here to share it with me."

There's still one race left in the series. Tyla Rattray holds a 9-point advantage over Blake Baggett in the battle for second place, but there's a wide gulf between those two riders and Tomac, who trails by more than 100 points in fourth place.