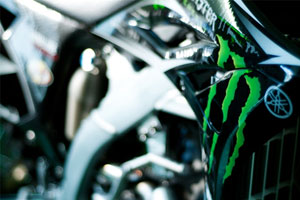 Monster Energy Yamaha have confirmed one half of the six-rider crew that will tackle the 2012 FIM Motocross World Championship on factory YZ450FM and YZ250FM technology and are delighted to announced that Steven Frossard, David Philippaerts and Christophe Charlier will continue to run the distinctive 'black and green' livery for next year.

The Michele Rinaldi-owned section of the squad will once more count on the services of Frossard and Philippaerts on the works YZ450FM motorcycles as the most successful crew in the short history of the MX1-GP class (four titles in eight years) enters its second term with the talented Frenchman - set to finish as runner-up in his maiden season - and the determined Italian who clinched the team's last crown in 2008.

Frossard has gathered six podiums in the previous thirteen rounds (ahead of the fourteenth event of fifteen this weekend at Gaildorf in Germany) and celebrated two victories. Philippaerts was a usual protagonist at the front of the field and triumphed at the Grand Prix of Brazil before his season was unfortunately cut short with a training accident. Joining the pair on the works YZ250FM will be former European Champion and highly rated teenage hotshot Charlier, who will begin only his third term as a Grand Prix racer.

Monster Energy Yamaha will field another two riders in MX2-GP and another individual on the YZ450F in MX1-GP and the structure of the full set-up will be announced shortly.

"I'm very happy that we can continue at our high level with Steven and David in MX1-GP thanks to Monster Energy and Yamaha," said Michele Rinaldi who will start his twenty-first year of racing with Yamaha. "Steven has had a very good first season and we have been encouraged by what he can do and the approach he has to his racing. With David we clearly have a strong relationship and he is a proven title contender for a number of years now. I believe with these two very capable riders we will be at the front again in 2012. I'm also pleased that Christophe will be coming to work with us. His talent on a motorcycle is very clear to see and we hope with some continued guidance we will be able to see his real potential on our YZ250FM."

"I want to express my thanks to Monster Energy as next year will represent our fifth season together and I can say they are a long-term motocross partner for their extended trust in Yamaha,' said Yamaha Motor Europe Racing Manager Laurens Klein Koerkamp. "Our partnership is working really well, not only in terms of results but also in the shared marketing and image benefits. With our 2012 line up we are ready to challenge for both the MX1 and MX2 world titles again. In MX1 we are even stronger with Steven now having an MX1 year under his belt and David has proven this year again he has the speed to win. We know Christophe has huge amount of ability and we hope for him to benefit from the immense experience in the Rinaldi squad, both on and off the track, so he can improve his skills through a possible different training and racing approach. We expect to announce the second half of our racing effort for next season in the coming weeks."