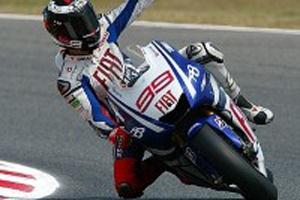 Jorge Lorenzo is the defending champion in MotoGP, but you wouldn't know that if you've been watching the races this year, as Casey Stoner has dominated and Lorenzo has mainly been a non-factor. After a disappointing race in Indianapolis that once again saw Stoner on top of the podium, Lorenzo and his team made some changes to their Yamaha that the rider hopes will get him back in the competition.

Lorenzo tested the bike at the San Marino Circuit in Rimini, Italy, ahead of this weekend's races and was pleased with the results, according to a team press release. He improved his time over previous races at the track and was able to top the first day of practice, beating Stoner and Honda's Dani Pedrosa, who took second and third, respectively.

"I feel much more comfortable on the bike this afternoon with the changes we made," said Lorenzo. "The setting we made is very similar to the Mugello one and there I won the race. To be honest I didn't expect so much change because we improved more than one second. We are now quite close to a victory I think. Casey and Dani are still so fast but at least we are there with them."