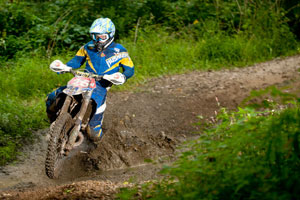 It may have taken the Husaberg Factory rider three years at the pro level to secure his first AMA National Enduro win but once he got a taste of the victory circle he has been unstoppable ever since. His latest victory was awarded at the ninth round of the AMA National Enduro Series held in Chandlersville, OH where he secured his third win in a row.

Not surprisingly, the Ohio native took to the course very well. "This is the kind of terrain I grew up riding so I feel right at home in this race," remarked Fahringer. The Husaberg rider started the race off in the best possible fashion, turning the fastest time in the first test section. "I couldn't believe I won the first test. I always struggle at the beginning of races and normally come on strong at the end so it was exciting for me to start off so well."

The second test is where Fahringer lost some time. "I hit a piece of debris in the trail and fell off my bike," he reported. "Once I got going I became tangled in some barbed wire and lost some more time. I lost a little confidence after that section and had to really plug away at the next few tests to gain back the time lost."

With four tests remaining, Fahringer stepped up his game and began to chip away at his lost seconds. Heading into the final test he was sitting in 4th place 25 seconds behind the leader. "I just put my head down and charged as hard as I could through that final section and had a blast. That last section was really fun and I was able to put in a great time." 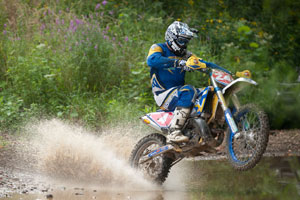 Fahringer went on to take the section win and the overall victory for the day by just one second over Thad Duvall. FMF/KTM riders Cory Buttrick, Charlie Mullins and Russell Bobbitt rounded out the top five positions while Fahringer's Husaberg teammate Mike Lafferty finished 6th overall for the day.

With his win streak in full swing Fahringer made a sad announcement yesterday that he will have to sit out the final round of the series. "Unfortunately, I tore my ACL two weeks ago in practice. I had originally intended to schedule my surgery after the final round in order to finish the series but it will not leave me enough time to fully recover for next season. If I have my surgery now, I will be able to recover and have one month preparation time before the 2012 season starts. With my recent success at the National Enduro Series I want to be 100% heading into next season and I believe this is the right choice to get me there." 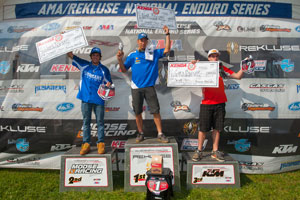 Factory FMF/KTM Team rider Cory Buttrick was the top finishing KTM at the ninth round of the AMA National Enduro Series held in Chandlersville, OH with a 3rd place overall result.

Buttrick ran a tight battle with his teammate Charlie Mullins throughout all six tests. Husaberg rider Nick Fahringer won the first test section but had a poor second test score which moved Buttrick and Mullins back into the mix. By the third test, Thad Duvall had also worked his way toward the top three and it became a four-way battle for the top spot. Mullins turned the fast time in four of the six tests, tying for the lead in the second with teammate Russell Bobbitt and in the third with Fahringer. 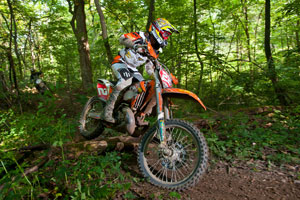 Heading into the final round, Mullins held the lead by eight seconds over Buttrick. When Mullins got held up by a few lappers in the final test it allowed the other three in contention to gain time on him. At the final score marker it was Fahringer who turned in the fastest time to earn the win by just one second on Duvall. Buttrick would take home 3rd for the day while Mullins final test score dropped him back to 4th place and Bobbitt rounded out the top five.

"It's disappointing to lead a race heading into the final section and walk away outside the top three. I felt like I was having a good run today and was looking forward to making up some points but I struggled with lappers in the final test and lost a lot of time to the front runners," remarked Mullins. 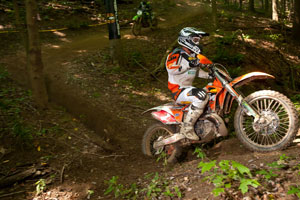 With only one round left there is just two points separating Mullins and Bobbitt at the top spot in the Championship points. "All my championships seem to come down to the final race. I was really hoping to perform well here today in order to increase the points gap but breaking my brake pedal off in the third test cost me a lot of time," remarked Bobbitt. "I just need to focus on not making mistakes and avoiding crashes in the final round."