Short Injured, Out For The Season 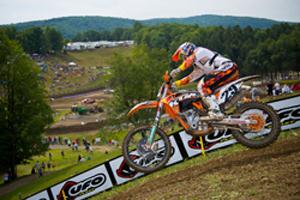 Although the season is coming to a close and the field of potential championship winners is beginning to be thinned in the 450cc class of the AMA Motocross competition, it still stings for a rider to get injured at this point in the year. Though he was likely out of championship contention with his current sixth-place position in the standings, Andrew Short will likely be missing the rest of the season with an injury.

The Red Bull/KTM Factory rider was training in California on Wednesday when he suffered a nasty fall. Short broke both of his wrists and his left elbow, effectively ending his season.

"It is unfortunate for Andrew that this accident has happened," team manager Roger DeCoster said in a release. "The entire team is deeply disappointed that he is injured so close to the season end. Short was just doing his job today, and unfortunately, this is part of the sport. We wish him a speedy recovery and hope to have him back on the bike soon."

Short finished 14th during his most recent ride at Unadilla. At 196 points, he was nearly 200 points off the leader, Ryan Villopoto, in the competition standings.