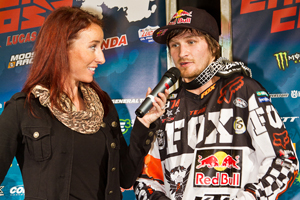 The 2011 GEICO AMA EnduroCross series, presented by Lucas Oil made a huge impact as part of the X Games less than two weeks ago then the riders made the trip up to the Pacific Northwest to race in the Comcast Arena in Everett Washington. And just like at the X Games, Taddy Blazusiak rode his Factory KTM 350 to the win. Geoff Aaron finished second on his GEICO Honda while Cody Webb rounded out the podium on his factory Beta.

Blazusiak, Webb and Jarvis each won their heat races to get direct transfers to the main event. Webb has really stepped up his game for EnduroCross and looks like he will be a regular podium contender. Jarvis made the trip from England to compete in a few North American off road events and showed that he is a contender. The biggest surprise non-qualifier for the main event was Monster Kawasaki's Taylor Robert who could not re-fire his bike after stalling in his semi.

When the gate dropped for the main event, Blazusiak immediately took the lead but could not shake the field for the first three laps. Brown, Webb and Aaron all stayed very close and began a fierce battle that slowed each of them and allowed Blazusiak to pull away. Aaron eventually took control of second and Webb fought back to third after a few mistakes. Brown took fourth just ahead of Graham Jarvis. Jarvis rode a very steady race but seemed uncomfortable with the high intensity of the first few laps. Lucas Oil backed Haaker finished sixth ahead of Oregon's Kevin Rookstool. Justin Soule finished eighth on the Monster Energy Kawasaki ahead of Gary Sutherlin, Wally Palmer and an unlucky Bobby Prochnau. The top Canadian off road motorcycle racer had worked his way to fourth but a derailed chain ended his race. 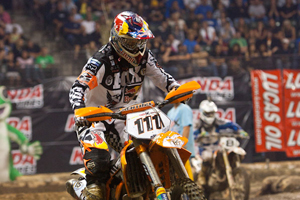 In the end, Blazusiak lapped all the way up to third place, which is an amazing display of skill with such a strong field of riders that included Aaron, a 10 time AMA Trials Champion, Cody Webb, the 2010 Trials Champion and Jarvis, who just this year has won the Romaniacs, Tough One and Hells Gate Extreme Enduro events.

Due to the X Games buzz for the Women's class and a large number of female riders interested in competing, the Everett round also included a Women's class. Seattle native and X Games gold medal winner Maria Forsberg took the win after literally dragging her bike across the finish line just ahead of Canada's Victory Hett. Chantelle Bykerk finished third ahead of Christy Williams and Kendall Reed.

Red Bull/KTM rider Taddy Blazusiak proved why he holds the number one plate in the AMA EnduroCross Series when he took the victory at the second round of the series held in Everett, WA. 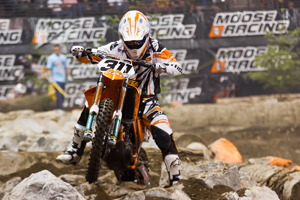 Fresh off his X-Games Gold medal win two weeks ago, Blazusiak was ready to throw a leg over his KTM 350 XC-F and claim another win. He started the day off great after turning the fastest hot lap time in the afternoon qualifier. He coupled that with a win in the first heat which gave him the first transfer spot to the main event. The second spot was given to FMF/KTM rider Mike Brown who finished 2nd in that same heat.

Blazusiak went on to continue his dominance when he nailed the holeshot in the main event and never looked back to cruise to an easy win. His teammate Brown battled around 3rd place through the majority of the race showing great speed in all sections with the exception of the fire pit. "I struggled in the fire pit and it cost me some time today. I feel like I could have easily been in the top three but every time I got back to that pit I took a bad line and allowed the guys to catch back up to me," remarked Brown. At the end of the ten lap main event Brown was able to hold on to finish 4th.

The GEICO AMA EnduroCross series will now head east to Indianapolis, Indiana for a Friday night event that kicks off the MotoGP weekend on August 26th. The event will take place inside the Pepsi Coliseum at the Indiana State Fairgrounds.

Tickets for the Indy event are available at Bloomington Powersports www.bloomingtonpowersports.com/ and IndyMoto www.indymoto.com, as well as directly from Ticketmaster. Information for all of the GEICO EnduroCross events can be found at www.EnduroCross.com.

EnduroCross tracks incorporate various elements of extreme off road racing into a supercross-style setting, including rocks, boulders, logs, sand, mud, a water-hole...and even a few special obstacles like giant tires thrown in! Known as the "toughest racing on two wheels," this indoor off road racing will certainly keep you on your feet. Don't miss your chance to see GEICO AMA EnduroCross "Live". ESPN, ESPN2 and ABC will combine to telecast 25 hours of live X Games 17 competition, which will include Enduro X. For the six remaining EnduroCross events, be sure to log-on to www.motorsportshour.com for local air dates/times for the Lucas Motorsports Hour on the Versus network.