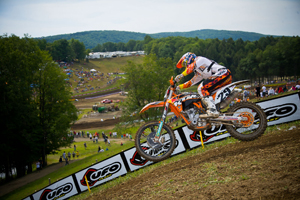 KTM Motorsports is saddened to announce that Red Bull/KTM Factory rider Andrew Short was injured during a crash while testing and will sit out the remainder of the AMA Pro Motocross Championship Series.

Short, currently sitting 6th overall in the 450 Motocross class point standings, was testing in California earlier today. The team reported that testing went smoothly for the first half of the day and Short was riding exceptionally well considering the rough track conditions.

In the late afternoon he suffered a crash and was immediately transported to the hospital. After careful evaluation by his doctors it was determined that he has broken both elbows and his left wrist. Due to his injury, Short will sit out the rest of the season with an estimated eight week recovery period.

"It is unfortunate for Andrew that this accident has happened. The entire team is deeply disappointed that he is injured so close to the season end. Short was just doing his job today, and unfortunately, this is part of the sport. We wish him a speedy recovery and hope to have him back on the bike soon," remarked Red Bull/KTM Team Manager Roger DeCoster.