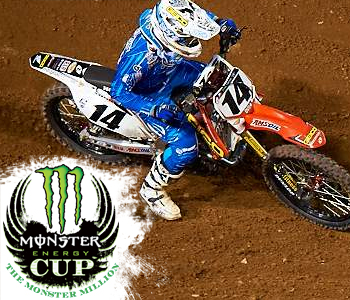 "I don't know anyone who would not put it all on the line for a million dollars," said Windham. That's a payday that will entice all the riders."

"We had a pretty exciting season in 2011, so it I think it's going to be good no matter what (Ricky) Carmichael and (Jeremy) McGrath throw at us," said Windham. "The competitiveness of the racing is at a whole new level. Carmichael and McGrath are two of the best riders the sport has ever seen, and it will be fun to ride a track that they design. Three shorter motos will for sure keep the racing tight and interesting. That will make it very difficult to sweep the night."

Throughout the 2011 Monster Energy Supercross season, Windham, who was selected as the "Fan Favorite" by the industry and fans, earned 12 top-10 finishes, with a season-best finish of second coming from Seattle's Qwest Field.

Tickets for the 2011 Monster Energy Cup can be purchased at the Thomas & Mack Center Box Office, UNLVtickets outlets, online at www.UNLVtickets.com, www.MonsterEnergyCup.com, or by phone at (702) 739-FANS. Tickets will be available at the Sam Boyd Stadium Box Office on the day of the event only.