KTM Does The Double In Latvia 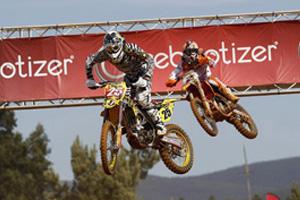 It was another dominant weekend for KTM during the Motorcross Grand Prix in Latvia, as the factory team was able to pick up wins in both MX1 and MX2.

Antonio Cairoli looked absolutely untouchable as he got his first double win of the season. The KTM rider shot out to an early lead in both races and never looked back. Cairoli was already on top of the MX1 points standings, so his great weekend only served to increase that lead. Monster Energy Yamaha's Steven Frossard finished second in both races, while Honda's Evgeny Bobryshev was third overall.

In MX2, it was Ken Roczen on top once again. Roczen won both of his races as well, although the performance was slightly less dominant than Cairoli. In the first race, Roczen was behind Jeffrey Herlings for much of the race, before finally passing him.

Of course, if Herlings won, it would have made little difference: he races for KTM as well. Roczen won the second race with room to spare, and Herlings finished second overall to complete KTM's winning weekend. CLS Monster Energy Kawasaki Pro Circuit's Tommy Searle was able to achieve third, but he still trails both Roczen and Herlings in the points standings.