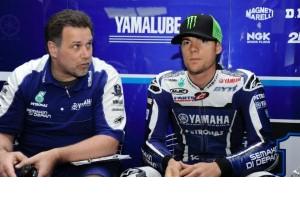 Fans who are planning to attend the U.S. Red Bull Grand Prix at Laguna Seca will have a special treat, as Yamaha has announced a program featuring some of their top riders from past and present.

Yamaha factory riders Jorge Lorenzo and Ben Spies will be on hand, along with Tech 3 racers Colin Edwards and Cal Crutchlow. They'll be joined by former World Champions who won while riding for Yamaha: Kenny Roberts, Eddie Lawson and Wayne Rainey.

The group will be onstage at the Yamaha Marketplace from 6-7 to interact with the fans and ask questions. The event is part of Yamaha's anniversary celebration, which marks 50 years in grand prix racing.

Yamaha is putting on a wide range of events at the marketplace beyond the World Champion panel. AMA racers Josh Hayes and Josh Herrin will be in attendance to sign autographs for the fans. Chris Clark, Tommy Aquino, Melissa Paris and Bill Dixon will also be in the marketplace to sign and chat with fans at various times.

Riders with children are encouraged to visit the "Learn to Ride" portion of the Marketplace, where children from 2 to 12 will be coached on a TT-R 50 or TT-R 100 by a Yamaha professional. Older riders can browse through the latest lineup of 50th Anniversary motorcycle gear, which Yamaha will debut at the event.