Musquin To Return At Washougal 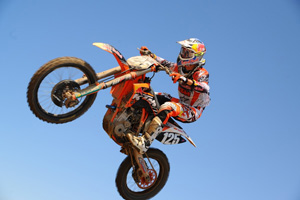 Red Bull/KTM Factory rider Marvin Musquin has announced that he will make his return to the AMA Pro Motocross Championship Series at the Washougal Motocross National on July 23, 2011.

Musquin has had a string of injuries since arriving in the U.S. He had just recovered from a torn ACL before the start of the outdoors series and was able to make it through one round safely before he suffered a compound break in his thumb at the Freestone race.

After having a small surgery to fix the injury, Musquin was instructed by his doctors to take the past six weeks off the bike but was able to continue his fitness training at the gym. "Luckily, I was able to continue work-outs at the gym which has helped me maintain my endurance over the past few weeks. I feel just as fast as I was in I got hurt, I just need to work on strengthening my hand now," remarked Musquin.

Now with one week of riding under his belt, Musquin is already making huge strides. "My hand is getting stronger with each ride and I feel confident that I should be able to hold on for an entire moto by the time Washougal comes around. I am so excited to return to the series. I just want to race."