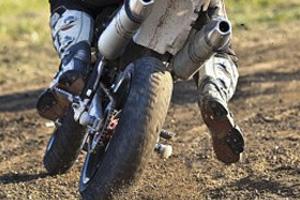 While wire-to-wire wins and dominant performances can be impressive, the moments that motorcycle racing fans ultimately live for are the last-second passes and exciting finishes. There was plenty of that at the recent Wiseco John Penton GNCC in Millfield, Ohio, which represented the ninth round of the Can-Am Grand National Cross Series.

Paul Whibley grabbed the holeshot in the race, but it was merely a good start to a competition that stretched for well over three hours. Whibley was in good position for most of the race, but KTM's Kailub Russell eventually drew even, setting up an exciting final two laps.

Once the two riders reached the motocross section, it was anyone's guess who would reach the checkered flag. Yet Whibley passed Russell on the jump and took home first place.

"I was putting pressure on him there at the last and we both were riding as hard as we could," Whibley told Cycle News. "He didn't jump that double at the finish and I did and I was able to get around him just before the checkered flag. It was an all or nothing kind of deal."