Two Hayden Brothers On The Podium In Ohio 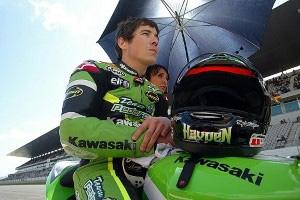 It's safe to say that the Hayden's are one of motorcycle racing's most successful families, with brothers Tommy and Roger Lee competing in the AMA Superbike series while Nicky races in MotoGP. The Hayden family proved their dominance in the AMA Superbike race on Sunday, with two of the brothers getting on the podium at the Mid-Ohio Sports Car Course.

Together, the three riders put in a clean sweep for Suzuki as a brand, even if they were split among two different teams. Defending champion Josh Hayes, riding for Monster Energy Yamaha, finished in fourth place.

Hayes started off in the lead, but soon found himself behind the Suzuki trio. Young and Tommy Hayden battled for dominance, but it was eventually Hayden taking the win. However, Blake Young is still the overall points leader, with 290 to Hayes' 276. Tommy Hayden is still far off at 233 in third place.