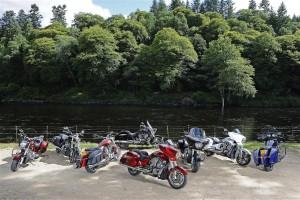 Pennsylvania has signed a new bill into law that will finally allow dealers to sell motorcycles on Sundays.

Across the country, controversial "blue laws" are increasingly being repealed by those who see them as unconstitutional, reports the Patriot-News. Laws such as this were put into place to enforce the religious "day of rest" on Sundays. However, many now see them as somewhat outdated.

"I can't think of a single reason why it's any of the State's business if someone sells a bike on Sunday," rider Scott Loveless told the news source.

In Pennsylvania, dealers were allowed to stay open on Sundays, but were restricted to selling motorcycle gear and accessories, not the bikes themselves. Pennsylvania still has a few "blue laws" on the books, including one banning hunting and another preventing car sales. A law banning alcohol sales was repealed several years prior.

Part of the impetus for the change was other states making the switch. New Jersey repealed their motorcycle blue law earlier this year, and bordering states such as New York, Ohio and Maryland also allowed sales on Sundays. In some cases, dealers may have lost sales to riders who went over the border to buy their bike.