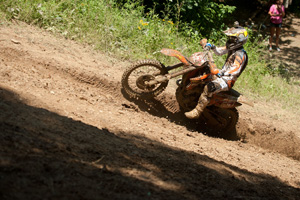 Factory FMF/KTM rider Kailub Russell earned his career best XC1 class finish at the John Penton GNCC when he crossed the finish line in 2nd position after a race long battle with Paul Whibley for the win.


This round marked the ninth round of the GNCC Series and is dubbed the "John Penton" after the man responsible for bringing KTM to the United States. Joining Penton in the crowd was a large group of KTM employees that had traveled from KTM's east office for the race. All members of the KTM staff lined the fence as the race began and were thrilled to cheer on Russell as he battled for the overall win. 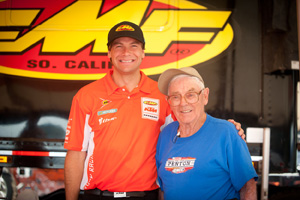 Russell got off to a great start rounding the first corner in 2nd place. He and early leader Paul Whibley remained close for the first lap with Russell eventually making a pass for the lead on the motocross track. The two riders would continue their battle throughout the 3-hour race switching the lead multiple times.


On the final lap, the riders were bar to bar as they entered the motocross track. Russell had a slight advantage as they made their way to the final few turns. He went wide in one section which left the door open for Whibley to put a wheel on him. Whibley was just able to edge out Russell and take the lead and the eventual win approximately 20 yards from the finish.


"It was devastating for me to lose in the final few feet of the race. I was running up front all day and I just couldn't hang on those last few corners. As upset as I am in losing at the tail end of the race, I am happy to walk away from this race knowing I gave it my all and still pulling off my best finish this year," remarked Russell after the race. "Now that I have run up front, I am excited for the final few rounds." 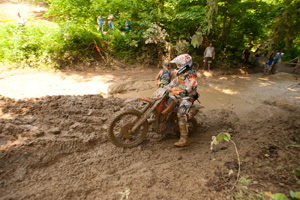 Meanwhile, Russell's XC1 teammates, Charlie Mullins and Cory Buttrick, were battling it out amongst each other. The two riders remained within a minute of the lead riders throughout the entire race. Mullins made a pass on Buttrick for 3rd place on lap two but lost the position a lap later after losing time in a mud section. The mistake cost Mullins two positions and he crossed the line in 5th place on lap three. He was able to catch back up to Buttrick on lap 4, where the two riders battled again for some time before Mullins made the pass stick. Mullins went on to finish the race in 4th place while Buttrick held on for 5th. 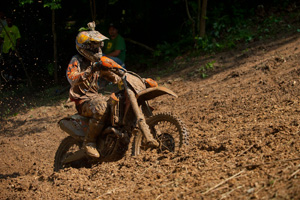 "We are very excited to see Russell near the top step of the podium and we are also happy for Mullins and Buttrick today. Mullins had a dead last start after stalling the bike and made his way quickly through the pack. He lost direction once through the mud but was able to recover some time lost there as well. Buttrick has been battling with some illnesses the past couple weeks and he is finally on his way to recovery. I think we will see him well within the top five at the remaining rounds as he continues to get over his illness," remarked Factory FMF/KTM Team Manager Antti Kallonen. 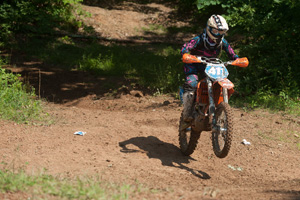 In the Women's class, GNCC fans saw Maria Forsberg dominate another round of the series to increase her hold on the championship points. The 2nd place finisher this weekend was a new face to the series, Forsberg's RPM/KTM teammate and current WORCS #1 plate holder, Kacy Martinez. In her first attempt at a GNCC race this season, Martinez put in a solid performance and finished on the podium behind Forsberg.