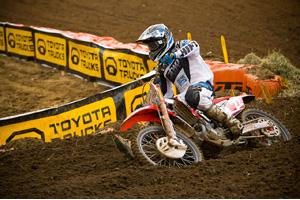 Chad Reed continues to race strongly in the Lucas Oil AMA Pro Motocross Championship, and the rider was able to pick up his fourth overall win of the season this past weekend. The competition was held at RedBud Raceway in Buchanan, Michigan.

Reed started off well in the opening moto, riding to victory after passing Davi Millsaps on the seventh lap. The second moto was less successful, but Reed was still able to finish third, which was eventually good enough to win the weekend.

Ryan Villopoto won the second moto, but his poor performance in the first race (9th) held him back from taking top honors. He did get on the podium, however, in third place overall.

Ryan Dungey, meanwhile, also had a very strong weekend. In fact, his two second-place finishes put him tied with Reed at the end of proceedings. However, AMA Pro Motocross rules dictate that ties are decided by whoever won a race, so Dungey had to settle for second place.

Brett Metcalfe took fourth with a consistent 4-5 performance, while Mike Alessi was fifth overall with an 8-4 weekend. The biggest disappointment was Millsaps, who could not build off of his 3rd place finish in the first moto, falling to 13th in the second and finishing eight overall.

Reed's win means that he continues to lead in the overall standings, with about a 20-point gap separating him from both Villopoto and Dungey.