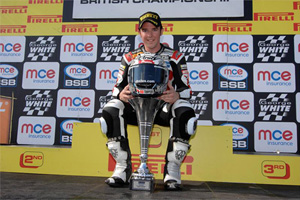 Alastair Seeley followed up his domination of the Supersport class on Saturday with a double victory on his Relentless Suzuki by TAS Racing GSX-R600 by almost nine seconds on Sunday.


The Ulsterman also took both pole positions and fastest laps over the weekend at the Norfolk circuit.

"That's what we came here to do: win races. Ben tried to rough me up in the first few laps but I got him back pretty early on and just watched my board and pulled away. It has been a perfect weekend for us with poles, fastest laps and two wins. Now we've just got to keep chipping away, but I have to say, the boys in the team have done a great job with the bike. It's making my job that bit easier and I'm sure my GSX-R600 will be even stronger as the season goes on. It was also good to see Josh getting the Superbike podium he deserved today. I'm convinced he'll go from strength to strength now."

"What can I say about Alastair Seeley that hasn't already been said? It's hard to describe how good he is to watch in that sort of mood. We have improved the bike yes, but the rider is always the final ingredient, and even we as a team were surprised to see how he dominated such a quality field. He needs to keep plugging away now. We know how good the new GSX-R600 is and with the improvements, we can make it even better for Alastair. He's not under any pressure and in that sort of form who knows what he can do."