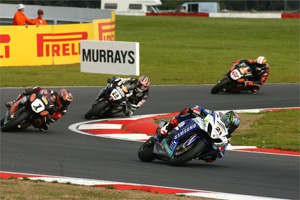 Samsung Crescent Racing's John Hopkins took a win and a podium from the inaugural BSB meeting at the Snetterton 300 circuit today and with the highest points tally of any rider on the day, strengthened his position in the 2011 British Superbikes Championship.


After six of 12 rounds, the Suzuki rider is second to Shane Byrne by a gap of 19 points but significantly is just one point behind on podium credits.


Team mate Jon Kirkham struggled with grip issues in both races. He battled these to record a hard-earned sixth place in race one (just 5.5-seconds behind winner Hopkins), but crashed out of the restarted race two while trying to recover from a slow start. Kirkham has dropped to ninth place in the Championship but with the lower leaderboard positions being so tight he in fact only lies seven points outside the important top-six 'Title Fighters' that go on to battle for the Championship over the final three rounds.

"I'm happy; my Samsung Crescent Suzuki was brilliant today and I can't thank my crew enough for creating a bike that I feel so confident with. We got the biggest points haul today and that's really helped my Championship position; to be just one point behind Byrne on podium credits will do fine at this stage of the Championship.


"I must also say, again, that I really enjoyed this circuit. It's been so much fun. All of us riders said before today that it would create close and exciting racing - and it did. It also led to some bar-banging, quite literally and ultimately that cost both Byrne and myself the chance to win the second race. I'm sorry for the both of us on that; we both probably wanted that win maybe too much and in the heat of the moment you want to do everything you can to make that win happen."

"I'm feeling pretty second hand after crashing at the Bombhole in that second race. It's been a really tough day's racing as I haven't had the rear tyre grip I need to do the job. Emotionally right now I don't feel so upbeat, but I guess if I can finish this close to the lead on a bike that's not yet 'mine' then what can come when we get the set-up sorted?!"

"We had a cracking first race. Hopper proved his set-up was right by doing great lap times throughout the race and being able to manage his tyres so that he had what he needed to steal the win at the flag. In the second race it looked like he stood a chance of running away with the win, only for the race to be stopped because of a crash. With the race re-run as a nine-lap dash it became something of a banzai affair for everyone - hard passes were being made on every corner. We lost the win in all of that, but the podium finish is some consolation.


"JK's had a very testing weekend. He hasn't yet found a set-up that will work for him as Hopper's found on his bike. We're doing everything we can to make that happen. That JK can in the meantime make a top-six result like he did in race one is testament to his considerable skill. The re-run of the second race cost him more than it did for Hopper. He made his worst start of the weekend and crashed while trying to recover so many places over so few laps. I can understand his frustration, but as soon as we can solve his grip issues then I know he's going to be podium material again.


"We're looking forward now to Oulton Park in a fortnight's time, for our second visit - the venue of Hopper's first win. We'll be looking for more podiums and hopefully more wins again!"