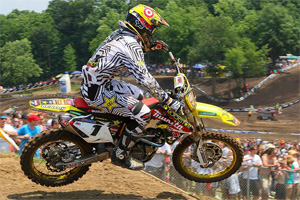 
Dungey had good morning practices and great starts in both motos. He was fourth out of the gate in moto one but quickly moved into third during the first lap. By the seventh lap, he was able to grab second and then put his head down and powered his RM-Z after the leader. Dungey charged hard for the next nine laps and caught up to the leader but wasn't able to make a pass and settled for a second-place finish. In moto two, Dungey's RM-Z450 rocketed him out of the gate and into the front for the holeshot. He slipped to second in the first lap and charged hard for the 16-lap race but ended up crossing the line for another second, which gave him a second-place overall on the day. The reigning Champion remains third in the Championship points, just six points out of second. 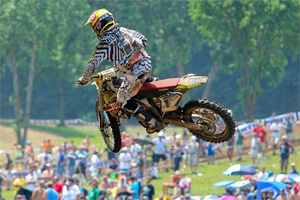 "It was a good day," said Dungey. "I went two-two on the day. Practice was good. I got off to good starts on my RM-Z. I battled and almost got first in the first moto; I just came up a little short. Second again in the second moto - it was tough. The track was challenging and I fought the track in a few places. But overall, it was a good day. My Rockstar Makita Suzuki team did a great job and my Suzuki ran great this weekend. We'll just keep moving forward. I'm looking forward to Millville. We have this week off and we'll be able to work on a few things on the bike and physically and mentally as well. Just try to get better in a few areas and show up better. That's the goal. Millville is a great track; a fun race, my hometown race, and the fans are great. It's one of my favorite tracks in the series." 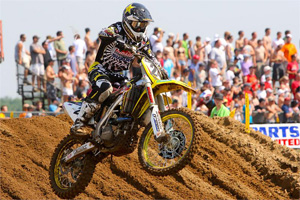 Metcalfe started the day strong with the fifth fastest time in qualifying. The Rockstar Makita Suzuki rider used the power of his RM-Z to launch himself into fifth out of the gate directly behind his team mate in the first moto. He was able to make the pass for fourth in the second lap and rode strong for the remaining 14 laps to finish fourth. In moto two, Metcalfe once again pulled a good start that put him up with the front pack. The Rockstar Makita Suzuki rider immediately slotted himself in fifth and charged hard for the 16-lap race to finish in the fifth position. His four-five finishes were good enough for a fourth-place overall. Metcalfe's strong result moved him up two slots in the championship points race to fourth place. 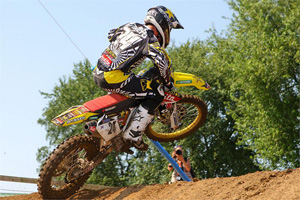 "Redbud went really, really good," said Metcalfe. "I was extremely happy with the day and to finally have a result in the top five, where I feel I belong, was important. Especially finishing up with a good result here before the week off and heading into the second half of the season. Everything was working great for us. My Rockstar Makita Suzuki was working awesome and I really feel like we found the setup I need and now it's just getting out there and getting the results I want. I qualified well so I got a good gate pick, which was important to get good starts. I was able to run up to the front pack and keep myself separated from the rest of the field. I was able to get a fourth in the first moto and a fifth in the second, which gave me a fourth overall for the day - a much better result than the last couple weeks. I want to thank the entire Rockstar Makita Suzuki team and Yoshimura for getting my bike dialed in here for Redbud. I'm looking forward to having a weekend off and we're gonna put our heads down and try to make more improvements. I'm looking forward to Millville. It's a great track and similar to Redbud, so our bike setup should be pretty good. I look to try to be up front and sneak in for our first podium of the year."


The Rockstar Makita Suzuki team's next event is the seventh round of the 2011 AMA Pro Motocross Championship on Saturday, July 16th, at the Spring Creek National in Millville. 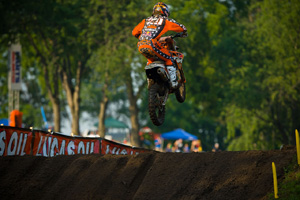 Red Bull/KTM Factory riders Mike Alessi and Andrew Short both finished inside the top ten at the sixth round of the AMA Pro Motocross Championship Series at Red Bud MX Park.


In moto one, Short earned a decent start rounding the first lap inside the top ten while his teammate, Alessi, had to work his way up from the back of the pack. At the one lap mark, Alessi was sitting in 17th and Short was running in 7th position. Short continued to work hard to keep his lap times consistent throughout the first moto. His efforts helped him gain one more position before the end of the moto. Alessi also put in a solid effort to move from 17th to 9th by the moto end. 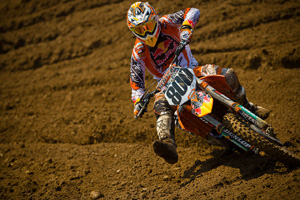 After suffering a poor start in the first moto, Alessi redeemed himself with a 4th place start in moto two. Short wasn't far behind just outside the top ten. Moments into the second moto battle, Alessi was putting the moves on Chad Reed. Before the end of the first lap, Alessi had passed Reed to move into 3rd place. Alessi remained in 3rd position for the first half of the race with Reed in tow. The two battled for multiple laps to put on a good show for the enthused Red Bud crowd for that final podium position. Around the 9th lap, Alessi lost his battle with Reed and settled into 4th. Alessi hung tight to that position and finished 4th overall for the day. Meanwhile, Short had moved his way up from his 10th place start to finish the moto in 8th. Alessi's 9-4 results earned him 5th overall for the day while Short's 6-8 moto finishes earned him 7th.


"I struggled a bit with my start in the first race but was able to climb through traffic pretty easily," commented Alessi. "I felt the best I have since returning from my injury today and I think it showed in my second moto battle with Reed. I had a lot of fun racing him and am glad to see I am one step closer to landing on the podium." 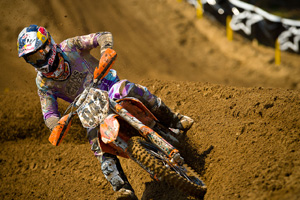 JDR/J-Star/KTM rider Tye Simmonds was able to earn series points at his first race back since recovering from pneumonia.


Simmonds sat out the Budds Creek race after being diagnosed with pneumonia the week prior. Now after two weeks of resting, Simmonds arrived at Red Bud ready to race.


In the first moto, Simmonds had a bad jump off the gate and came around the first corner outside the top twenty. Going into the second corner, another rider clipped a hay bale and swerved into Simmonds line causing him to tip over. Simmonds crash put him in last place by the time he was up and recovered. 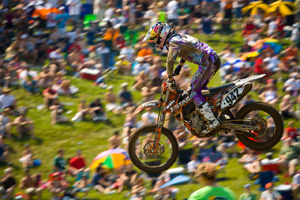 Simmonds spent the remainder of the laps coming up through the pack and was able to move into a solid 17th place by the end of the moto.


In the second moto, Simmonds had a better start rounding the first corner right around 20th place. Simmonds passed a few riders on the first lap and moved into 16th place. Throughout the remainder of the moto he was able to maintain his position and even move up one more spot to earn 15th that moto. His 17-15 moto scores earned him 16th overall for the day.