Pedrosa To Return This Weekend 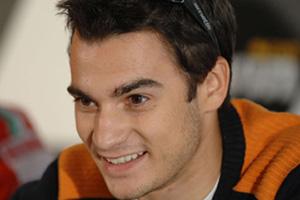 Dani Pedrosa has announced that after missing more than a month of time, he'll be back for this weekend's MotoGP race in Mugello, Italy.

The Repsol Honda rider suffered a broken collarbone after a controversial clash with Marco Simoncelli. He was originally slated to miss two races at most, but complications forced him to undergo surgery on the bone, causing him to miss this past weekend's race in Assen.

"After missing three races, I'm happy to be back in Mugello," Pedrosa said in a team release. "During this period I've been very focused on my recovery and after the second operation I have improved a lot. I'm really looking forward to riding the bike, getting into the groove again and to be as competitive as I was before the injury. It's been difficult being out of competition, but that was the situation and I couldn't do more. I have been in contact with my team during this time and I know they also look forward to getting back to normal."

Pedrosa, once one of the favorites in the competition, likely has no shot at the championship now that he has missed out on three races' worth of points, but he's certainly always a threat to win a race.