Dungey Gets First Win Of Season 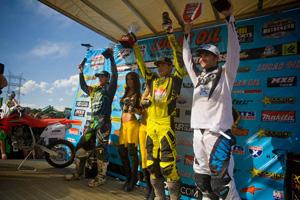 Ryan Dungey put together a dominant performance to win his first outdoor motocross race since last year, taking home the overall win in the 450 class of the AMA Pro Motocross Championship at Thunder Valley Raceway in Colorado.

Dungey battled his way to second place in the first moto, finishing just behind Ryan Villopoto. In the second race, it was again the two Ryans who jumped out to the front of the pack. However, this time it was Dungey who picked up the win.

Both riders had the same points, but per tiebreaker rules, Dungey's second moto victory allowed him to pick up the overall win for the weekend, giving him his first win this year. Dungey had previously been robbed of a win after his bike ran out of gas on the final lap of a previous race.

"It means a lot to get this win," said Dungey. "We're five rounds in and I wish it could have come earlier, but that's racing. I have to give it up for Team Rockstar Makita Suzuki; we've all been working our butts off. This win feels really good - I'd like to keep continuing it."

Points leader Chad Reed finished third overall, good enough to retain the lead over Villopoto and Dungey, who are second and third in the standings, respectively.