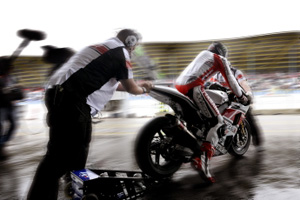 Yamaha Factory Racing has made the decision to re-schedule the planned Mugello 1000cc test for the 2012 bike.


To allow for further time for the development of the bike the decision has been made to postpone the test to a later date.


The new plan foresees Yamaha's 2012 1000cc prototype tested by Jorge Lorenzo and Ben Spies following the Czech Republic round of the MotoGP World Championship at the Brno circuit.