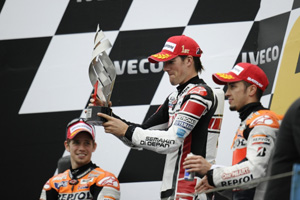 Texan Ben Spies chose to kick off Yamaha's 50th Anniversary of Grand Prix Racing in style today, delivering a flawless performance at the Assen TT to claim his first ever MotoGP race win. Spies had been on form all weekend delivering consistent fast race pace in all sessions whether wet or dry and been beaten to pole by a mere 0.009 seconds by Marco Simoncelli. A great start saw him leading the race from the first corner, quickly building a sizeable gap to Casey Stoner in chase which he held and extended to over 7.6 seconds by the chequered flag. The victory was all the sweeter for being delivered riding in the special red and white livery used this weekend to mark the anniversary celebrations. â€¨

Team mate Jorge Lorenzo delivered a true champion's performance after being cause to crash on the first lap by Marco Simoncelli. Lorenzo quickly remounted and charged from the back of the pack through to claim an impressive sixth place finish and salvage valuable championship points from the unfortunate incident. â€¨

As a result of his performance Spies jumps to seventh in the championship standings, tying with Dani Pedrosa on 61 points in sixth and just ten points behind Nicky Hayden in fifth. Lorenzo adds ten points to his championship tally and heads to Mugello next week with 108, 28 points behind leader Casey Stoner.

"It was a strange race today as it was one of the most comfortable races we had and it resulted in a win. I saw the Simoncelli crash on the TV screen in the corner of my eye so I knew about it. I had a good feeling in the bike in the first couple of laps and had to push as much as I could to get a gap. When Casey was pushing back I still had a few tenths if I needed to, we could always match the pace. To do it this weekend with the 50th colours gives a little bit of pressure but it came out good! I was racing as hard as I could, I have to thank my guys; they gave me a great bike today. At least we've won a race now!"

"Of course Simoncelli doesn't want to throw me off the track, that wasn't his intention but I think he is not very conscious about the risks in this class with these tyres. I thought he learnt from the past and the polemic he created with Dani but it's clear he hasn't learnt. The good thing is that we finished in sixth and took some points. I was fast with a good pace. The championship is now more difficult so we have to go all out to win races and go fast. We are making changes to the bike that are making it better with stability to brake harder and deeper so I think we can go to Mugello and be more competitive like Ben demonstrated today. I want to say a big congratulations to him for his first GP win and also thank you to all my guys who again worked really hard all weekend to give me a competitive bike."

"A very tough race, mixed feelings here as we are very disappointed by the action with Simoncelli, It was a racing accident but pretty stupid. I'm happy for Ben that we were able to win here for the 50th Anniversary race. It's good to see we are able to win and it was also good to see Jorge picked up quickly and was able to do very good lap times so we know the speed was there. I know we would have been able to fight for the podium. I have to congratulate Ben he did a great job this weekend and I feel sorry for Jorge as he didn't deserve this result."

"Ben rode a really fantastic race today, we are very proud and I don't think his first GP win could have been more perfect. He was consistently fast all weekend and we were confident that he would deliver a really strong performance today. It's even more special to have won here whilst celebrating our 50th Anniversary of Grand Prix racing. I have to say his crew worked extremely hard all weekend and made sure he had a bike that he could win on. I'm very disappointed for Jorge, it was clear the crash was not his fault. He showed his true colours as a world class racer with the way he rode following the incident. We leave Assen with a day of highs and lows and head to Mugello with even more confidence that we have made another step in our package and can challenge for more victories."

Colin Edwards and Cal Crutchlow both saw deserved top five finishes in the Iveco TT Assen elude them at the legendary Circuit van Drenthe this afernoon. After rain had played a major part in the earlier 125cc and Moto2 races, the 26-lap race started on a dry but cold track, with threatening grey clouds still looming overhead as the action commenced. With air temperatures only just reaching a cold 13 degrees and the earlier rain affecting grip levels, Edwards and Crutchlow both fitted the soft compound Bridgestone front tyre to their Monster Yamaha Tech 3 Team machines. Crutchlow made the best start of his MotoGP career and ended the first lap in fourth place, the British rider showing phenomenal early speed to chase Casey Stoner and Andrea Dovizioso. Ignoring the pain of the recovering left collarbone he broke at Silverstone just 15 days ago, the adrenaline fuelled 25-year-old superbly kept nine-times World Champion Valentino Rossi at bay until he started to encounter a front tyre grip issue after five laps. Determined to overcome the issue to claim his first top six MotoGP finish, he fought brilliantly to remain in the top six until lap 11 when the problem worsened. The 2009 World Supersport champion opted to pit for a new front tyre on lap 13 and he demonstrated his true potential again in the second half of the race to set a fast and consistent pace on his way to 14th. American Edwards also encountered a front tyre grip issue as the race avoided any repeat of the earlier rain. Once he'd settled into a fast pace, Edwards was comfortably cutting the gap to C rutchlow and Rossi when his front tyre started to lose traction. He held fifth until lap 17 when he was unable to hold off compatriot Nicky Hayden. Edwards also then encountered a rare arm pump issue caused as he tried to compensate for the muscle damage to his left ribcage suffered in a recent crash at the Catalunya. Despite his best efforts the 37-year-old was unable to maintain his pace and he dropped down the order to finish in seventh position.

"That wasn't an easy race at all and to be honest I'm happy I made it to the finish. I was feeling really good and catching Valentino and Cal when I went through the second corner and lost the front. I thought it was just because I was pushing but the next corner the same thing happened and from that moment it was really difficult . Each time I was in a right-hander I couldn't turn but that wasn't my only issue today. After about ten laps I got really bad arm pump. I've got no upper body strength with the rib injury from Catalunya, so to compensate I was doing everything with my arms and at one stage, the combination of the two issues meant I thought I was going to have to pull in. It was a case of gritting my teeth and getting some points but we'll analyse what happened because Ben (Spies) won the race on the soft front tyre. Our bike isn't set-up completely different, so we'll have to talk to Bridgestone, but hats off to Ben because he's done an awesome job all weekend and rode a great race."

"Looking at the positives I got a fantastic start and for the first few laps I was running close to the front in a MotoGP race for the first time. I felt confident I could keep Valentino behind me but then after about five or six laps I started struggling with the front tyre on the right side. I had no choice but to come in and change it because if I had carried on pushing it was going to be easy to crash and that's the last thing I need to be doing at the moment. Having only had surgery on my left collarbone just over a week ago I just couldn't afford to have another crash. Without that I've no doubt I'd have finished fourth but I've proved again I've got the speed and shown that I can race with the best in this class. It wasn't the final result we wanted but I can't change it and I still learned a lot, so now I'm concentrating on Mugello and getting a good result there."

"It was a brilliant start for both Cal and Colin and at that moment, after the incident between Simoncelli and Lorenzo, I was thinking that they could finish with a really strong Team result. The lap time was looking good from both of them and we were hoping they could finish inside the top six together for the first time this season. But suddenly we saw the lap time of Cal drop a lot and he came to the pit where we found out that the right side of his soft front tyre was completely finished. So he left the pit again with a hard compound, but of course his race was finished, though I want to thank him for going back and pushing to his maximum for the Team. It was only a few laps later also Colin's pace went down. He managed to defend seventh position but by the end he was very slow with the same problem as Cal. Unfortunately that is racing and in those conditions you have to take a bit of a gamble, as we almost had no proper dry time on the track. Finally I'd like to say congratulations to Yamaha and Ben. This weekend was huge for Yamaha being its 50th anniversary celebrations and for Ben to win was the perfect way to finish the weekend."