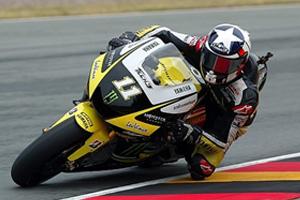 Nearly every manufacturer offers motorcycle gear and accessories that closely approximate what the pros use out on the track. But it's not every day that riders get the chance to purchase the actual racing gear from some of the top stars in the world.

Fortunately, a charity auction is making that a possibility, as Colin Edwards and Ben Spies are teaming up to benefit Feed the Children. Both riders will be auctioning off the riding gear that they recently used at last weekend's British GP - a race that Edwards took third in.

Yet it's not just gear that auction winners will be walking away with. Included in each package are a pair of tickets to the Red Bull Grand Prix, which is scheduled for July 22-24 at Laguna Seca. A hotel room and paddock access is promised for the trip. In addition, the winners will be invited to attend Edwards' Texas Tornado Boot Camp, a racing camp that Edwards has built in Texas.

With the price of the gear alone topping $4,000, this is likely to be an expensive package - and a nice chunk of change for charity.