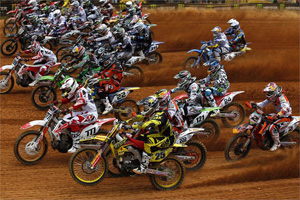 Rockstar Energy Suzuki World MX1's Clement Desalle posted a perfect scorecard of 1-1 on his works RM-Z450 for his third overall victory of the season at a sunny Agueda circuit for the Grand Prix of Portugal and the sixth round of 15 in the FIM Motocross World Championship.


Thirteen thousand spectators entered the tight and compact circuit south of Porto and were able to see the Belgian defeat Antonio Cairoli and Evgeny Bobryshev by controlling two exciting 35 minute a 2 lap motos.


After recording his third pole position of the season with a confident success in Saturday's qualification heat, Desalle tackled arguably the roughest and most technically difficult terrain of the year so far in confident fashion.


Under sunny skies the 22 year old led the first moto from start to finish in spite of pressure from Steven Frossard and then Cairoli in the closing stages. In the second, he had to be patient for seven of 21 laps to draw up to the machines of Bobryshev and Goncalves but was soon facing an empty track. Once more, Cairoli was the pursuer in the final laps but Desalle dealt admirably with the pressure to record his sixth moto triumph from 12 in 2011 (four more than his nearest rival). 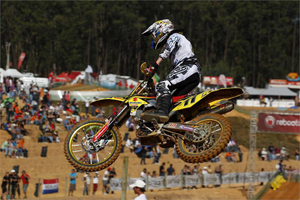 Steve Ramon slipped off his machine entering the waves section in the first moto and pulled his left groin. Bearing the discomfort for the second sprint the former World Champion was able to complete a steady 40-minute trek for fifth place and eighth overall.


Desalle has now led the MX1 series standings for the last three rounds and for five of the six to-date and he was able to stretch his lead over Cairoli from six to 12 points. Ramon is 11th and nine points from brand-mate Kevin Strijbos and the top 10.


The final event of three back-to-back races will take place next weekend as Rockstar Energy Suzuki World MX1 make the relatively short journey across the border to La Baneza for the Grand Prix of Spain. 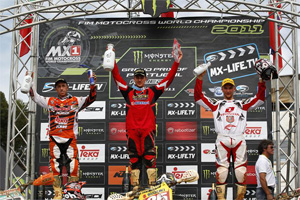 "It was good to win and I'm happy with the result but I'm not that pleased with some mistakes I made. Tony was getting close to me both times but I stayed focussed and didn't want to crash. I wasn't tense and I knew what speed I could do. It was good to get more experience of being at the front and learning from the pressure! I had to pass Rui and Bobryshev in the second moto but I took my time because I didn't want to have to take any risks. I looked for opportunities and there wasn't many because the track was very rough and stony. I am still leading the Championship, but we will think about this more at the end of the season!"

"One bad race and one not so bad. In the first moto my start was OK but in the waves section around the back I made a mistake. I was going on the outside to get some speed to do the first double but somebody came up the inside and just blocked the face of the jump. I went sideways and it was a big one. I stretched my groin and it was pretty painful. The second moto was better but the track was really tricky. Nagl went down in front of me and so did Philippaerts. You had to be really focussed. I tried to close to gap to Bobryshev in front but I started to get stomach cramps near the end. I don't know why; maybe because of the impact from the earlier crash. It was tough to handle and that was it for today. I did my best. The track next week will be completely new for me. I haven't even seen a picture so it will be interesting." 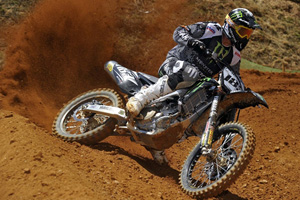 Monster Energy Yamahas Steven Frossard walked away from a heavy-hitting Agueda circuit and the Grand Prix of Portugal with fifth position overall on his works YZ450FM. The winner of the French round collected some decent points after a first moto finish of third, although he was limited to seventh later in the day after a lacklustre start from the gate. â€¨

Excellent weather covered the weekend and crimsoned the 13,000 attendance. The tight circuit was another hard test for the riders with the distinctive red dirt becoming very rough and demanding; penalising errors and forming the kind of squared-edge bumps that draw so much energy and concentration. â€¨

Frossard was nursing some discomfort with his right thumb after a small tumble in the qualification heat on Saturday. A bright start in the first moto helped the Frenchman terrorise the rear wheel of leader Clement Desalle but entering the final stages he was powerless to Tony Cairolis attack and passed the chequered flag in third. A poor gate later in the afternoon signified a busy stretch of work for the MX1 rookie but he fared well, arriving to seventh before being unable to gain further ground.


Frossard also saw the spill suffered by team-mate David Philippaerts. The Italian lost the front end of his machine in a descent while climbing the top ten and in the resulting crash cut his elbow and hurt his ribs. Earlier in the day DP had suffered another fall in the formative stages of the first moto and was forced to retire. It was a hard weekend for the former world champion and his 2011 title hopes.
Anthony Boissiere had a technical problem in the first moto that caused a DNF but he adjusted to the track in the second affair and took thirteenth, despite nursing some pain from his accident in France last week.


The winners of back-to-back events had to forego the podium on this occasion but Frossard has created distance between himself and Max Nagl (who crashed and injured his right hand) in the MX1-GP world championship standings. He is now third by 21 points. Philippaerts is seventh with Boissiere in fifteenth.
Monster Energy Yamaha will move east and across the border to La BaÃ±eza this week for the Grand Prix of Spain and round seven of the series. The inauguration of the small facility south of Leon will represent the third of three consecutive meetings and precedes a small break in the calendar before another three-race stretch.

It was a bit difficult this weekend with my finger because the track had many hard bumps. It was hard for me on the downhills and also in the waves. I took a really good start in the first moto and went from fifth to second. I tried to catch Desalle but then Cairoli arrived and he was faster. I had been a bit too aggressive and was getting some arm-pump. It wasnt easy to ride smooth and quickly after that. Anyway it was a good heat for me. I was a bit too tense at the start of the second race because I had the bad launch from Saturday in my head. I made a mess of it and tried to fight back but after twenty-five minutes I saw David crash and decided to consolidate, not go too crazy and focus on making the finish.

Im very disappointed. I tried to push today but the track was very difficult and if you made a mistake then you paid for it and I did. I took the outside line to make the triple in the first moto and found Goncalves who had changed his line when I was in the air. There was not much that could be done but it was a big crash. In the next race I made the little jump down the hill but I lost the front end, like I did in France. My arm needed a few stitches and I have some pain in my ribs but it could have been worse. 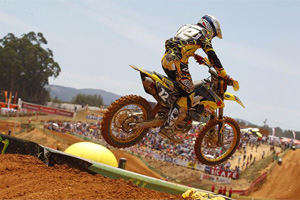 Simone Zecchina took another step in his motocross education at the highest level by taking the RM-Z250 of the Suzuki Europe MX2 squad almost into the points at a warm Agueda circuit for the Grand Prix of Portugal.


A crowd of 13,000 came to the facility south of Porto for the sixth round of the FIM Motocross World Championship and although the agreeable climate created a pleasant event, the track itself was rough, demanding and difficult for overtaking. The layout represented another tough lesson for the Italian teenager on his second appearance of three for the GP team. Number '12' rued two mediocre starts, and in the first moto his part in a crash in the formative stages meant that he showed good resilience to push his way back to 23rd. In the second race, the rookie tried hard but did not have the power to last the entire distance at the speed he wanted to carry.


Zecchina and Suzuki Europe MX2 will next be in action at La Baneza for the Grand Prix of Spain this coming weekend. Valentin Teillet is scheduled for a return to action for the Swedish round at the beginning of July. The same event will also host the second meeting of six in the European 125cc two-stroke series; a contest that Zecchina currently leads.

"My starts were not good but I was quite pleased with how I could keep going and finish the race near the top 20. I couldn't get a good rhythm going in the second moto and after 25 minutes I was finished. Physically I felt better than I did in France and I am learning a lot about what I need to do. Spain will be my last GP with the team but I hear the track is quite 'Italiano' so that should be good for me."