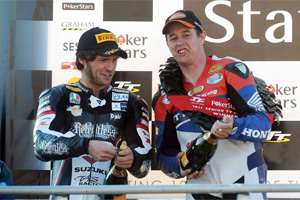 Guy Martin narrowly missed out on a coveted Senior TT victory on the Isle of Man on Friday, but the Lincolnshire rider made it four podiums from five starts at TT2011 for Relentless Suzuki by TAS Racing with second place and a personal best lap of 131.038mph.


The six-lap race was delayed due to inclement weather conditions around the Isle of Man for five hours, but when the action eventually got underway at 5.15pm with the sun shining all around the circuit, Martin used it to his advantage - leading at the opening checkpoint at Glen Helen and showing the rest of the field he really meant business.


Martin held his slender 'P1' advantage for two of the six laps before getting embroiled in a tight race-long battle with John McGuinness and Bruce Anstey, in what turned out to be a classic and memorable Senior TT. At the chequered flag, after almost two hours of high-speed action, Martin took his 13th career TT podium and his fourth at TT2011 on GSX-R machinery, just seven seconds down in second place.

"I led the first couple of laps of a Senior TT so I can sleep happy tonight. We had great pit stops and I had the focus and drive, but that was as much as I could give out there today. I hit all my apexes, got on the throttle when I should have and the only places I lost time was late in the race passing backmarkers, as it took me a bit of time getting back up to speed. By heck I couldn't believe the attention I got out there with people shouting and waving at me all around the circuit. I could actually hear it through my ear plugs!


"The job was really going all right and the bike never missed a beat so I'm a happy camper. I still haven't won one. I'm trying, but I'm glad I was able to push John today and I'll just have to come back next year and beat him won't I?"

"What a fantastic end to a very successful TT for TAS Racing and all our sponsors. I would personally like to thank each and every one of our sponsors, as without their support we just would not be here. Our objective in racing is always to try and win, however this is the TT and just to finish a race is an achievement in itself. So to come away with four podiums from five races and a second place in the Senior TT is very pleasing and testament to the effort put in by our whole team, the Suzuki machinery and of course Guy himself.


"It was one of the most exciting and close Senior TT races for some time and to hear the fans cheer for Guy when he was leading was unbelievable. Although it would have been great to have won, our consolation is a 131mph lap and being beaten by one of the greatest riders in TT history.


"We will now look forward to returning to our BSB campaign and selecting some further outings for Guy later in the season. After that we can prepare for next year's TT where we will work even harder at getting our hands on that Senior TT winner's trophy."